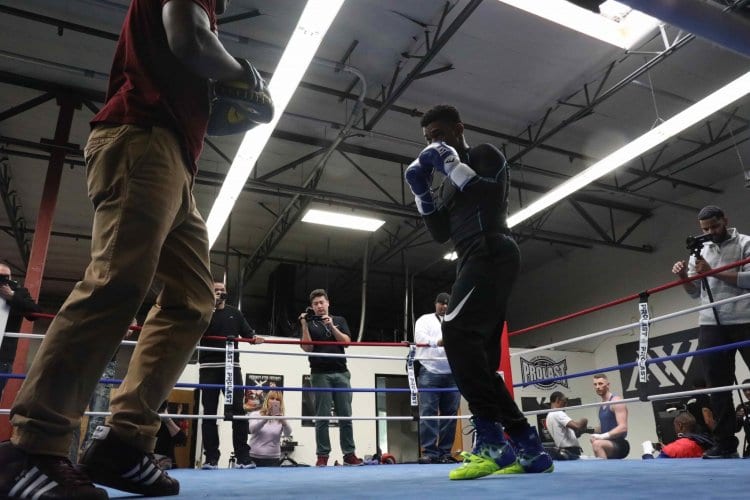 photo: Lukie Ketelle
New York City (March 15, 2017) In front of huge turnout of media at The Mecca of Boxing, Madison Square Garden, Unified Middleweight World Champion GENNADY “GGG” GOLOVKIN, (36-0, 33 KO’s) and WBA Middleweight World Champion and Mandatory Challenger, DANIEL “THE MIRACLE MAN” JACOBS, (32-1, 29 KO’s) along with teams held the Final Press Conference leading up to their highly anticipated divisional clash this Saturday, March 18 at the famed venue in New York City.
The Championship Event presented by K2 Promotions will be produced and distributed live by HBO Pay-Per-View beginning at 9:00 p.m. ET/6:00 p.m. PT.
GENNADY “GGG” GOLOVKIN
“I’m very excited, everybody on my team is ready, just a couple days before another amazing drama show. I hope Daniel is ready, I hope he’s had his best training camp, I have a great deal of respect for his team.”
“Thanks to my team, thanks to my Coach Abel Sanchez, he opened my eyes for boxing, for new life. Thanks to HBO Pay-Per-View, this is the biggest chance for me and Daniel to show world class boxing.”
“Daniel said he’s come back home, I feel the same way, Madison Square Garden is like my second home, I love fighting here.”
“Thanks very much to my new sponsor Hublot and for their gift.”
DANIEL JACOBS
“Good to see everyone, glad to be back in NYC. Feeling a lot of love in my city, where it all started.”
“I was 15 years old when I first came to Madison Square Garden to watch the Golden Gloves, so to have an opportunity like this and fight at the Mecca of Boxing again for the biggest opportunity that I could possibly have—I feel very grateful.”
“Thanks to my family, my lovely lady Natalie, my son Nathaniel, my Mom, everyone who has just been in my corner.”
‘Thanks to my team, Andre Rozier and Chris Algieri, a pure joy to have him in camp, great nutritionist and great conversations. He really understands being at this level.”
“Also want to thank Virgil Hunter for allowing us to train at his facility in Oakland, a great place to have a camp. Also want to thank HBO for this opportunity, also to Showtime for the 60 Minutes piece they did which was stellar.”
“This is a great opportunity for me, I would never have thought five years ago through a whole bunch of craziness that I went through that I would be fighting for the unified middleweight championship.”
“I wouldn’t want to have it any other way, the biggest challenge on the biggest stage. I’m so focused, I’m so ready.”
“I have the utmost respect for Gennady and his team, we’re two ambassadors for the sport, and I’m honored to share the ring with him.”
ABEL SANCHEZ, Trainer of Golovkin
“Finally were five days away, looking forward to challenging that preparation that Danny had in Oakland. Andre and I both understand how serious this is, we had a great camp. I’d like to thank all of our sparring partners and Max Golovkin for his help in camp.”
“Most of all I’d like to thank Gennady for giving us this opportunity to nurture and show everyone the kind of fighter he is on Saturdaynight, the best middleweight in the world and probably one of the best middleweights ever.”
“I hope everyone comes out and witnesses a superstar in the making.”
ANDRE ROZIER, Trainer of Jacobs
“We had a fantastic camp in California, I can honestly say this was the best camp we’ve ever had.”
“Daniel worked hard, the team did a wonderful job. The entire team worked really hard.”
I’m never anxious about a fight but I’m excited for this one. We have some stiff competition, it’s all about what’s happening on Saturday, the two best middleweights in the world coming together to show you who is number 1. Needless to say Danny is #1”
TOM LOEFFLER, Managing Director of K2 Promotions
“We’re finally here, it’s finally fight week — seems like yesterday that we were here to announce this fight.”
“The two best middleweights in the world, fighting at Madison Square Garden, it’s truly a classic fight, one that the fans and media have very strongly have reacted to.”
“We kicked off fight week with both Michael and Danny along with Michael Buffer at the New York Stock Exchange this morning.”
“Thanks to Madison Square Garden, HBO, Keith Connolly and Al Haymon also Oleg Hermann on behalf of Gennady in putting this fight together.”
KEITH CONNOLLY, Team Jacobs
“Saturday night we’re going to settle who’s the best middleweight in the world. It’s going to be a tremendous fight, one of the biggest of the year and I know Danny is ready. He is laser focused after this camp in San Francisco. He’s never trained harder, never been more into the moment.”
“I expect Danny to come out on Saturday and shine, he has just as much power as Gennady.”
‘This is Danny’s coming out part, Danny’s ready and we hope Gennady is ready. Come Saturday night we don’t want any excuses that Gennady overlooked him or was thinking about another fight. Danny wants to beat the best Gennady and I think that’s going to happen on Saturday night.”
Tags:Daniel JacobsGennady GolovkinhboHBO BoxingK2 PromotionsPPVPress ConferenceTom Loeffler
Previous post