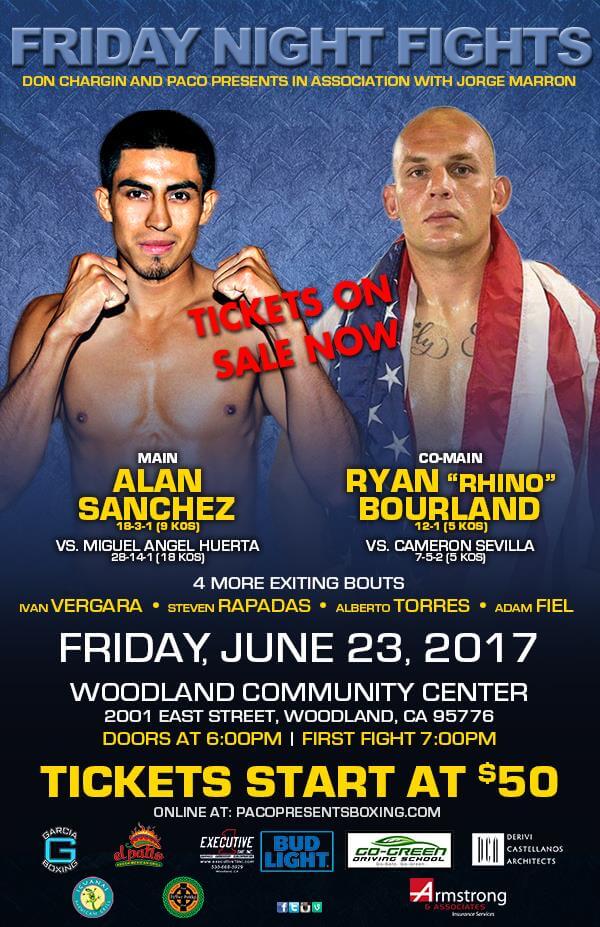 Alan Sanchez, who is currently on a six fight win streak with wins over former world title contender Pablo Cesar Cano and John Karl Sosa is looking to vault himself into the top 10 of the welterweight division with a win in Woodland, CA and challenge for another world title in the coming year.

The co-main event will feature light heavyweight Ryan “The Rhino” Bourland (12-1 5KOs) of Vallejo, Ca in action to defend his Global Boxing Organization light heavyweight title in a rematch against Cesar Ruiz (5-4 2KOs) of Mexico in a six round bout.

Featherweight Alberto Torres (9-0-2 4KOs) of Sacramento, CA will return in a six round bout against Angel Jimenez (8-12 1KO) of Mexico City, Mexico. Torres has been very fond of 2017 as he knocked out Adam Fiel in January, an undefeated prospect as well picked up a win in April against Jose Silveria and looks to get his third win of the year.

Vacaville, Ca featherweight Ivan Vergara (2-0 1KO) will look to continue his winning ways after picking up his first knockout win of his career in his last fight as he returns in a four round fight against Jose Mora (1-3) of Tijuana, Mexico and lightweight Steven Rapadas (0-0-1) will look to get his first win of his professional career as he fights veteran Luis Silva (4-10 1KO) of Tijuana, Mexico.

Tickets are available at PacoPresentsBoxing.com