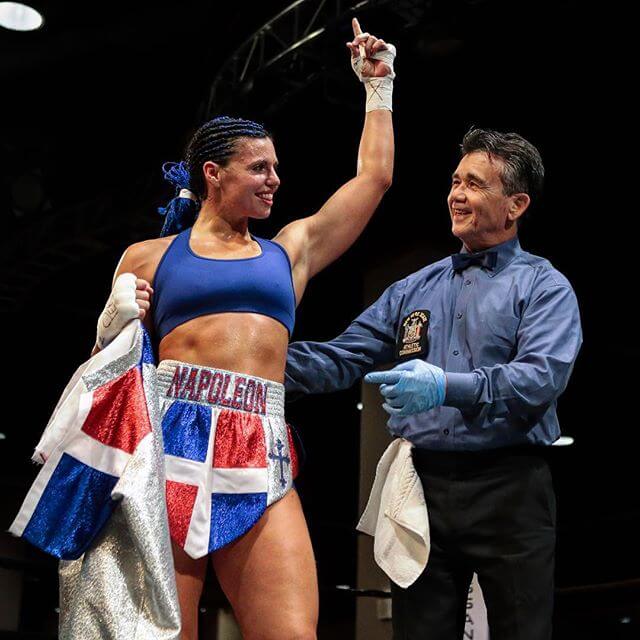 Photo: Alicia Napoleon Instagram
The undercard for the heavyweight world title showdown between Deontay Wilder and Luis Ortiz set for Saturday, March 3, from Barclays Center, the home of BROOKLYN BOXING, willnow feature an outstanding 10-round women’s world title clash between Long Island’s Alicia “The Empress” Napoleon(8-1, 5 KOs) and undefeated Femke Hermans (6-0, 3 KOs), of Londerzeel, Belgium, for the vacant WBA Women’s Super Middleweight World Title.
“I’m thrilled to be fighting at Barclays Center for this world title,” said Napoleon. “This means so much to me and for women’s boxing in the United States. I’ve worked very hard for many years and dreamed of becoming a world champion and to have my Long Island fans see me challenge for the title makes it even more special.”
“DiBella Entertainment, Premier Boxing Champions, Brooklyn Boxing and SHOWTIME remain committed to women’s boxing and together we have staged, or at least scheduled, a women’s fight of significance on every card we’ve worked on at Barclays Center,” said Lou DiBella, President of DiBella Entertainment. “Napoleon is a very charismatic and popular fighter from Long Island and, on March 3, she will have a chance to achieve her dream of becoming a world champion in front of her hometown fans.”
Owner of the two popular Overthrow boxing gyms in Brooklyn and Manhattan, Napoleon made her professional debut in August 2015 winning her first seven fights, including five by stoppage.
Following her first loss on December 10, 2016, to world ranked contender Tori Nelson, Napoleon bounced back to defeat Nikolett Papp, on November 18, 2017, in Queens, New York.
Victorious three times in 2017, Hermans will be leaving Belgium for the first time in her professional career for the world title fight with Napoleon. In her last bout, the 28-year-old won a unanimous decision against Ester Koneca, on September 30, 2017.
Tickets for the live event, which is promoted by DiBella Entertainment and TGB Promotions, start at $50 and are on sale now. To purchase tickets, visit Ticketmaster.com, BarclaysCenter.com, or call 800-745-3000. Tickets for the event can also be purchased at the American Express Box Office at Barclays Center.
The Premier Boxing Champions event is headlined by the highly anticipated Wilder vs. Ortiz matchup and will see undefeated former 154-pound champion Jermall Charlo take on Hugo Centeno, Jr. for the interim WBC middleweight title in the co-feature. The SHOWTIME CHAMPIONSHIP BOXING telecast begins live on SHOWTIME at 9 p.m. ET/6 p.m. PT with top super middleweight contender Andre Dirrell battling hard-hitting Jose Uzcategui in a rematch for the interim IBF168-pound world title.
Tags:Alicia NapoleonAndre DirrellBarclays CenterBermane StiverneDeontay WilderDiBella EntertainmentFemke HermansHugo Centeno JrJermall CharloJose UzcateguiTGB Promotions
Previous post

Thomas LaManna vs. Gabriel Bracero LIVE and FREE on Facebook 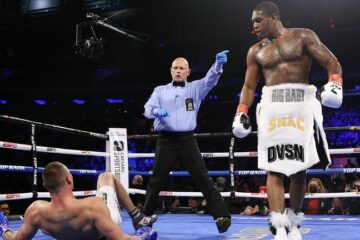