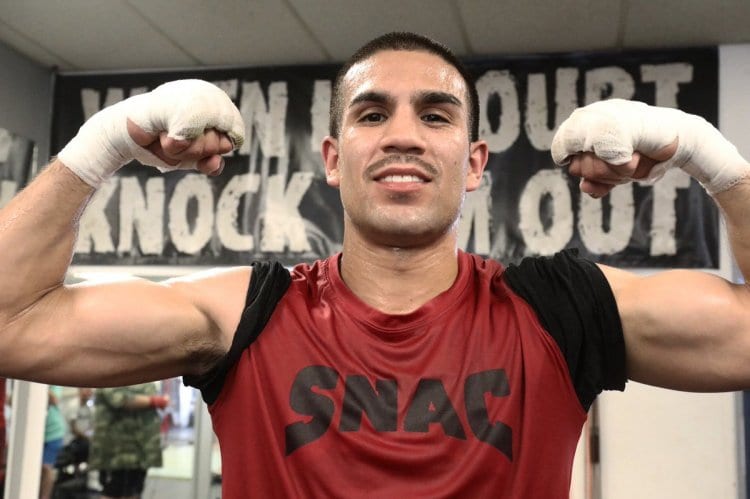 For ERICK DE LEON and ANDY ‘El Tiburon’ VENCES, the path to a super featherweight title shot will be forged on Saturday, March 10, when the undefeated contenders clash for the World Boxing Council (WBC) Continental Americas & World Boxing Organization (WBO) International Titles on the Oscar Valdez vs. Scott Quigg undercard at the StubHub Center in Carson, California.

The Valdez vs. Quigg world championship fight, along with Vences vs. De Leon, will be televised live and exclusively at 10:30 p.m. EST on ESPN and ESPN Deportes, and streaming live on the ESPN App. Additional undercard bouts will be shown on the ESPN App beginning at 8 p.m. EST.

De Leon (17-0, 10 KOs), a southpaw from Detroit, has won five of his last six bouts by knockout. Trained by Robert Garcia, his 2017 campaign showed why he is one of the division’s fastest rising contenders. On January 27, in Studio City, California, he stopped Jose Salinas in the fourth round with a body shot. Three months later, he knocked out former world title challenger Daulis Prescott in the third round. In his last bout, on the Vasily Lomachenko vs. Miguel Marriaga undercard, August 5 in Los Angeles, De Leon won a tough six-round decision over Adones Aguelo.

“My hand will be raised on March 10. I am focused and very hungry to become a world champion very soon,” De Leon said. “We are ready for war. I’m going to give it my all to bring that championship to Detroit and celebrate with all my Latin people and all of those who support me.”

Vences (20-0, 12 KOs), from San Jose, California, turned pro in 2012 after a standout amateur career that saw him capture three consecutive California Golden Gloves championships. He signed with Top Rank in 2015 and soon began climbing the rankings. On November 4, 2016, at Treasure Island Casino in Las Vegas, Vences won a technical decision over the previously unbeaten Casey Ramos. He fought three times in 2017, including a one-punch, second-round knockout of Jairo Ochoa on November 11 in Fresno, California.

“Thanks to my promoter Bob Arum and Top Rank for giving me the opportunity that many fighters dream of, which is to fight on ESPN,” Vences said. “I am ready to make my dreams become a reality.”

The Valdez vs. Quigg undercard will also feature the No. 3 WBO junior welterweight contender, ALEX ‘El Cholo’ SAUCEDO (26-0, 16 KOs), who will put his unblemished record on the line against the hard-hitting ABNER LOPEZ(25-8, 21 KOs) in a 10-round bout. Saucedo, from Oklahoma City, holds the WBO Latino belt and trains with Abel Sanchez’s stable in the mountains of Big Bear, California. He last fought on November 11, 2017, dropping Gustavo Vittori three times in the third round to force the stoppage.

“I have been very focused and motivated in this camp,” Saucedo said. “I know that I am very close to a title shot, but I have a tough fight in front of me on March 10. He is just another step on the way that I have to get through, for me to make my dream come true.”

One of female boxing’s rising stars, MIKAELA MAYER (3-0, 2 KOs), will take on the rugged MARIA SEMERTZOGLOU (7-3, 2 KOs) in a six-round super lightweight bout. Mayer represented the United States at the 2016 Olympics, where she fell just one win short of advancing to the medal round. A Los Angeles native, Mayer will be making her StubHub Center debut against Semertzoglou, a two-time European title challenger who has never been knocked out.

“I’m incredibly excited to be fighting near my hometown again and especially excited to be fighting in the outdoor arena at the StubHub Center!” Mayer said. “I’ve had a great camp with my coaches, Kay Karoma and Al Mitchell, where we’ve added some new tools to my arsenal. I’m sharp, focused, and ready to perform in the ring. My aim on March 10 will be to find new fans for women’s boxing. See you there!”

Heavyweight ANDY RUIZ (29-1, 19 KOs), of Mexicali, Mexico, makes his ring return after a 15-month absence against DEVIN VARGAS (20-4, 8 KOs) of Toledo, Ohio. Ruiz last fought on December 10, 2016, when he lost a majority decision to Joseph Parker for the vacant WBO heavyweight title. Against Vargas, Ruiz will continue his quest to become the first Mexican-born heavyweight champion in boxing history.

Promoted by Top Rank®, in association with Matchroom Boxing, remaining tickets priced at $206, $104, $53 and $27.50, including facility fees, can be purchased online at AXS.com, by phone at (888) 9AXS-TIX, or by visiting the StubHub Center box office.