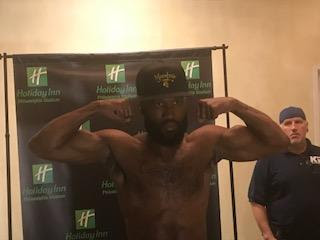 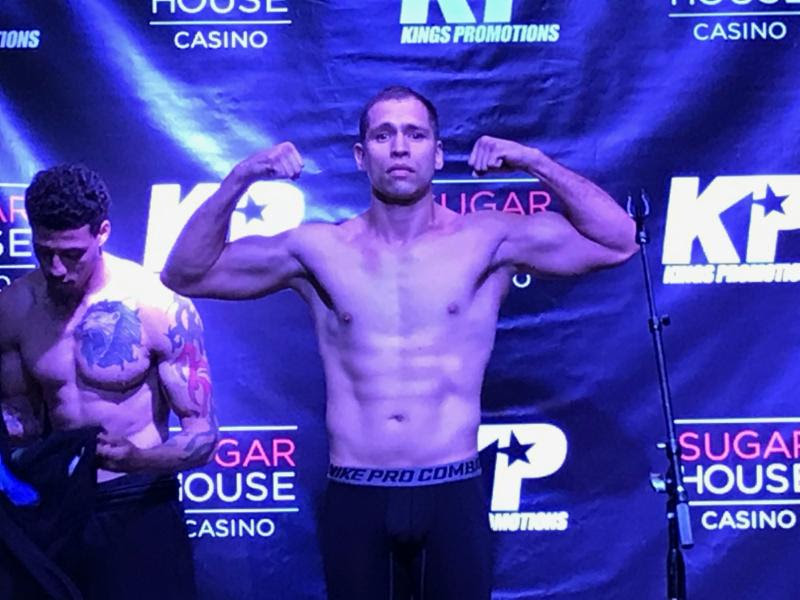 Rising super middleweight, Brandon Robinson will take on veteran Oscar Riojas in an eight-round bout that will headline a huge night of boxing on Friday night, April 6th at the 2300 Arena in Philadelphia.
The 10-bout card is promoted by King’s Promotions.
Robinson of Philadelphia has a record of 9-1 with seven knockouts.
The 29 year-old Robinson is a two-year professional, and has won nine straight fights.  He has a 1st round knockout over previously undefeated Brandon Clark, as well a eight-round unanimous decision over tough veteran Christopher Brooker.  In his last bout, Robinson disposed of Juan Zapata in the 1st round on January 26th in Philadelphia.
Riojas of Monterrey, Mexico has a record of 16-8-1 with five knockouts.
The 34 year-old Riojas is a five year professional who won his first 11 bouts.  Riojas has been in the ring with title challengers Ronald Gavril, Vyacheslav Shabranskyy as well as undefeated fighters Conrad Cummings, Immanuwel Aleem, Francy Ntetu, Enrique Collazo & Ronald Ellis.
Riojas is on a two-fight win streak with his latest triumph coming on October 28th as he stopped Ivan Lagunas in the 1st round in Mexico.
In the eight-round co-feature, former world title challenger Jose Gonzalez will take on Zac Ramsey in a super lightweight bout scheduled for eight-rounds.
Gonzalez of Toa Baja, Puerto Rico has a record of 24-2 with 19 knockouts.
The 34 year-old is 10 year professional won his 1st 22 bouts with wins over Osenohan Vazquez (1-0), Eric Cruz (5-1-2), Hector Marengo (5-0-4), &  Edgardo Soto (12-2) before challenging Ricky Burns for the WBO Lightweight title.
In that fight, Gonzalez was well on his way to becoming a world champion before having to bow out of the fight with an injured hand.
Gonzalez went on to become a two-time WBO Latino Lightweight champion and defeated Marvin Quintero.  In his last bout, Gonzalez lost to Diego Magdaleno when Gonzalez could not continue due to a severe low blow.
Ramsey of Springfield, Massachusetts has a record 8-2 with four knockouts.
The 28 year-old Ramsey is a six-year professional.
Ramsey won his first seven bouts, has two wins over undefeated fighters Edwon Soto (9-0-2) and Divante Jones (9-0).  He is coming off close decision loss to Philadelphian Raymond Serrano on September 22, 2017.
In an eight-round battle of undefeated super bantamweights, Marcus Bates (8-0-1, 7 KOs) of Washington, DC fights Raeese Aleem (10-0, 5 KOs) of Las Vegas, NV.
Steven Ortiz (8-0, 3 KOs) of Philadelphia takes on David Perales (10-11-1, 5 KOs) of Monterrey, Mexico lightweight fight.
In six-round bouts:
Carlos Rosario (7-3, 4 KOs) of Pennsauken, NJ fights Seifullah Wise (3-4, 1 KO) of Philadelphia in a super featherweight affair.
Jordan Peters (2-1-1, 2 KOs) of Washington, DC squares off with Joshaphat Ortiz (2-0, 1 KO) of Reading, PA.
In four-round bouts:
Colby Madison (6-0-1, 4 KOs) of Owings Mills. MD fights Guillermo Del Rio (2-2, 2 KOs) of South Houston, TX in a heavyweight battle.
Rasheed Johnson (3-1, 1 KO) of Philadelphia takes on Latorrie Woodberry (1-6-1) of Roanoke, VA in a welterweight battle.
Poindexter Knight (2-0, 2 KOs) will fight Vincent Floyd (3-4-1, 2 KO) of Philadelphia, in a welterweight fight featuring fighters from Philadelphia.
Jesus Perez (3-0, 1 KO) of Reading, PA tangles with pro debuting Sultan Isakov of Philadelphia in a welterweight affair.
Tickets for this great night of boxing can be purchased at www.2300arena.com for $100, $75 and $50
Tags:2300 ArenaApril 6thBrandon RobinsonOscar RiojasPAphiladelphiaPhilly