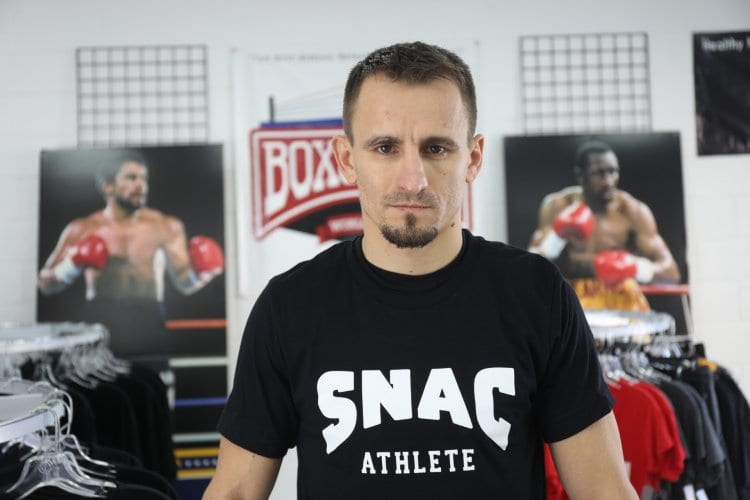 Photo: Lukie Ketelle
Despite taking the bout on less than five days’ notice, two-time world title challenger Petr Petrov is ready for his showdown with junior welterweight Ivan Baranchyk, this Friday night on a SHOWTIME BOXING: SPECIAL EDITION live onSHOWTIME(10 PM ET/PT)
Petrov, who has not fought in eleven months since dropping a decision to undefeated WBO Lightweight champion Terry Flanagan, was training for a return bout in his native Spain before getting the call last weekend after Anthony Yigit fell out of the fight with Baranchyk.
Petrov arrived at the Deadwood Mountain Grand in Deadwood, South Dakota, and he is confident going into this important fight.
“I feel good.  I am always training and was getting ready for a fight in a couple months in my native Spain, so I don’t find this to be a big deal to accept this fight on short notice,” said Petrov.
What made it easy for him to take the fight, was the opportunity to fight for the number-2 position in the IBF.
“My goal is to be a world champion, and this fight gets me close to that.  I don’t know anything about Baranchyk, but I know he has never fought anyone with my experience, and combined with being on the stages where I have competed will prove to be the distance on Friday night.”
The Baranchyk (16-0, 10 KOs) vs. Petrov (38-5-2, 19 KOs) bout is promoted by DiBella Entertainment, in association with Fight Promotions Inc., Holden Productions & Banner Promotions.
Tags:BoxerDiBella EntertainmentIvan BaranchykMarch 9thPetr PetrovShoBox
Previous post