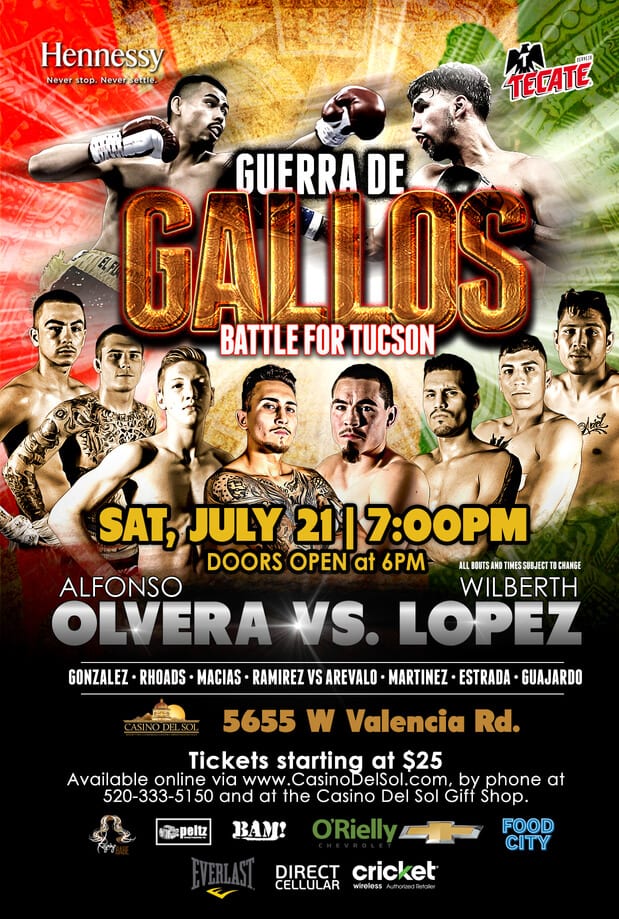 Michelle Rosado’s Raging Babe has built a reputation for quality, sold out events across the country, and she returns to Tucson’s Casino Del Sol on Saturday evening, July 21, with Guerra De Gallos, a fight card that is quickly living up to its name.

The scheduled eight-round main event features a hometown battle between two fighters who have earned their stripes fighting tough competition on the road. After competing in other fighters’ backyards and dealing with their opponents’ home crowds and officials, junior welterweights Alfonso Olvera (10-4-1, 4 KOs) and Wilberth Lopez (21-9, 15 KOs) will have a chance to showcase their incredible tenacity and talent in front of their own families, friends and Tucson fans.

Olvera, who has had trouble finding opponents, has faced top competition since turning pro. In his second fight, he went the distance with Ivan Baranchyk, currently unbeaten at 19-0. Olvera’s trail of upsets includes a 2005 unanimous decision over previously unbeaten Ryan “Cowboy” Karl and another over Chicago’s Genaro Mendez.

Lopez, who knocked out Phoenix’s Keenan Carbajal in his professional debut in 2013, has gone on to fight stiff competition across the country. He was the first to take World Super Bantamweight Champion Isaac Dogboe the distance when they met in 2014.  Three years later, Lopez upset Jose Roman (24-2-1, 16 KOs), via unanimous decision in Roman’s backyard. Lopez’s southpaw style and reach kept Roman at bay and earned him the win.

“This is a fight between two highly skilled, local fighters who have never had the benefit of hand-picked opponents and hometown decisions,” said Rosado. “This fight will be one of the best Arizona has seen in years. I’m excited to give Tucson fans what could be Fight of the Year, and to bring back the pride that comes with competing to be the best in the state.”

Casino Del Sol has hosted boxing events since 2003, and has become a premier destination for boxing in Southern Arizona. Fernando Vargas, Mia St. John and Yori Boy Campas are just a few boxing legends to have graced the casino’s ring. “We are excited to bring boxing back to Tucson once again,” said Kimberly Van Amburg, CEO of Casino Del Sol. “Our goal is always to provide the best entertainment in Southern Arizona, and Guerra De Gallos will definitely deliver.”

The July 21 card begins at 7 p.m. Doors open at 6 p.m. The card is promoted by Raging Babe and Peltz Boxing. For more information, visit www.RagingBabe.com. 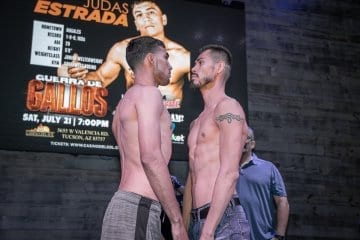