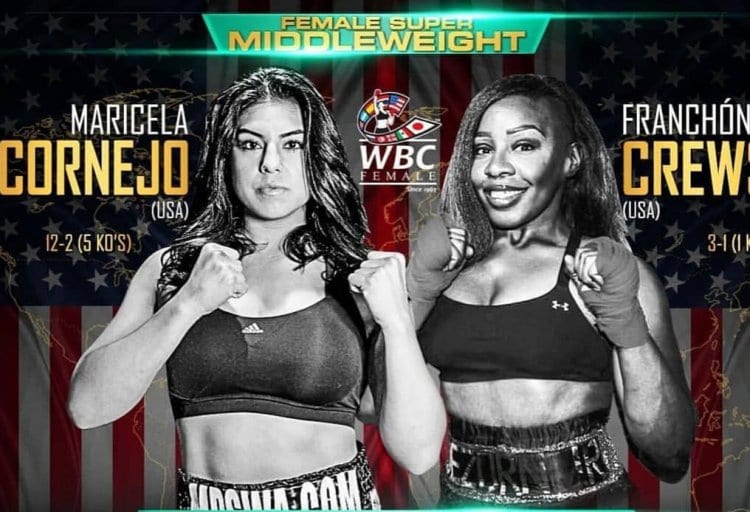 Maricela Cornejo is the most googled female boxer currently yet she has never held a world title. Cornejo hopes to change that as she fights Franchon Crews-Dezurn for the WBC super middleweight title on September 13th in Las Vegas, Nevada at The Joint at the Hard Rock Casino.

Cornejo has had a turbulent professional career as she has nearly mastered the art of social media by obtaining views and eyes to her career the most female fighters have yet to do, yet with that spotlight comes questions around does her aesthetics and ability to garner attention matching, her skill in the ring.

This is the perfect opportunity on ESPN2 in the co-main event of a major fight week to silence those detractors.

Women’s boxing is having a revolution as Katie Taylor, Claressa Shields, Mikaela Mayer, Nicola Adams, Selina Barrios amongst others are looking to push down old norms and perceived notions of where women stand in boxing. Cornejo is a fighter who doesn’t have the amateur pedigree of those mentioned prior but has in some instances, double the fanbase as well as a lot of power and a great work ethic.

Cornejo signed with Golden Boy Promotions, though the terms and length of her contract where not publicly released, she has since fought three times on Golden Boy cards with her upcoming world title fight being her fourth in one calendar year. Yet, it hasn’t been an easy road.

Cornejo lost her third professional fight to Tiffany Ward in 2013, she would also lose a close split decision in New Zealand to Kali Reis in her first attempt at the WBC women’s middleweight title. Cornejo though has gone on to rebuilding her career as she now has accumulated 14 fights in the professional ranks. Corenjo essentially had to fight her amateur career as a professional and well, most are not the most understanding.

Originally the bout was set for the interim WBC super middleweight title, but the WBC later upgraded the bout to the full world title when it was brought to their attention that Claressa Shields had vacated the belt. That might not mean a lot to the fans at home, but to the fighters, that means everything to compete for a world title.

Crews-Dezurn not unlike Cornejo has had a rough go of it as a pro. Her professional debut was against Claressa Shields, who quite possibly is the best women’s fighter ever. She has since won three bouts in a row, this an opportunity of a lifetime for Crews-Dezurn as she is a blue-collar fighter, taking whatever fights she can get and not being built up by a promoter.

The fight is a bout between two working class, likable women’s fighters with compelling backstories, featured on the fight week of one of the biggest bouts in recent memory, Canelo vs. Golovkin II.

For Cornejo, as an observer, a world title would help silence critics who have viewed her as a model first and boxer second, because beating Crews-Dezurn, would be a win over a top 10 caliber opponent in the division, for arguably the most well-respected title in the sport of boxing.

Cornejo never envisioned herself a fighter in adulthood, beyond the metaphor of having to fight for every opportunity to make something successful in her life, but a chance decision to lose weight for movie role found herself in the sport of boxing.

“I continued with [boxing], I invested all of my time and my life into.” Cornejo said earlier this year when interviewed by ITRBoxing.com at a media day reflecting upon buying a membership to the prestigious Wild Card Boxing Gym to train and potentially fight, a fight after doing it the right way.

Cornejo’s boxing journey found her moving time-zone to time-zone as she went from Los Angeles, Ca to Miami, Florida, to Las Vegas, Nevada, a few other pit stops as well before finding herself back in the Los Angeles, Ca area.

“I moved around a lot and I got to meet a lot of people and a lot of people got to see my boxing. I learned so much from a number of people – boxers, coaches…” Cornejo said about her journey.

Cornejo, who stated that she has never lost track of the vision she had towards boxing that she got the first day she stepped foot in a boxing gym is close to making the vision reality, if she is able to win on Thursday, September 13th at The Joint in Las Vegas, Nevada, on ESPN2, as she tries to accomplish what some many fighters dream of, becoming a world champion.