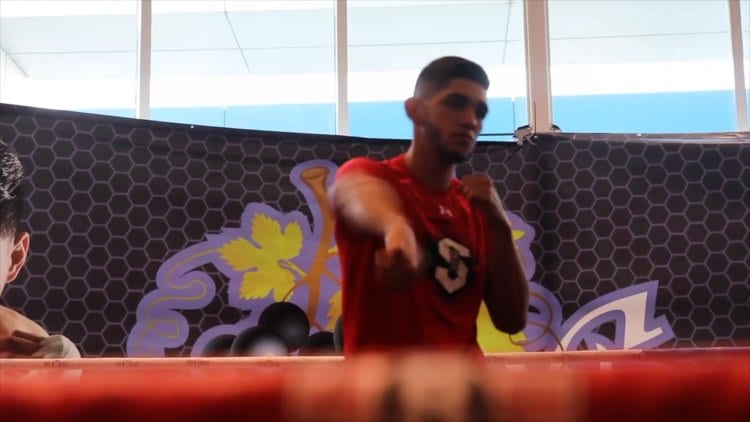 Alex “El Chollo” Saucedo is a very likable, lightweight who has entertained the fans for years, to the best of my memory being his televised bout against Raymond “Tito” Serrano at Treasure Island, but more than likely it predates even that. On Friday, Saucedo will get his chance to get whatever fighter hopes for – A WORLD TITLE, this time in storybook fashion in his hometown of Oklahoma City, Oklahoma.

Saucedo has moved his training away from where he once lived to train in isolation as well as high altitude training with Abel Sanchez in Big Bear Lake, Ca, one of the most world renown gyms. Saucedo has had mostly beneficial results, though Sanchez’s offensive style he teaches has seen Saucedo get hit a bit more than one might like as his fight against Lenny Zappavigna was a modern day classic, for better or for worse.

“I’m going to show boxing fans the real me on Nov. 16. He can say what he wants about me getting hit a lot, but I don’t have any draws on my record. He says I’ve been hit a lot, but if you have three draws on your record, that means you’re not that hard to hit.” said Saucedo on a Monday media scrum.

Saucedo, who faces WBO super lightweight champion Maurice “Mighty Mo” Hooker on Friday night from Chesapeake Energy Arena in Oklahoma City, Oklahoma, broadcast worldwide on ESPN, is not in for an easy one. Hooker has been the constant underdog, an afterthought, a fighter signed to a fledgling promoter in Roc Nation Sports only to win a title on foreign soil. In short, despite Saucedo’s promoter, Top Rank promoting the event, which is a great advantage, Hooker is the type of fighter, who has power and is willing to fight in any arena.

The match-up seems to be a true pick’em despite some feeling Saucedo this is a foregone conclusion that Saucedo will win and then face Arnold Barboza Jr. in the early winter if Barboza gets a win in December.

Hooker despite being the champion is getting the lesser of the attention and judging by his responses, he doesn’t mind. Just like when he use to visit Oakland’s famed King’s Gym, Hooker’s response are short, one sentence answers.

Hooker also noted that Saucedo is fighting in his hometown as well as fighting for his first world title, and questioned if nerves would be a factor. Hooker had gone overseas to the United Kingdom in his last bout to beat Terry Flanagan for the WBO super lightweight title. After the bout, weeks later, Hooker was arrested for a form of driving while not being sober and arrested. Some questions have lingered after the arrest about his training.

“Maurice Hooker is a champion for a reason. He’s a great fighter with a good reach and power in both of his hands. We have a tough fight on our hands, but we will be ready for anything that he brings to the table.” said Saucedo when asked about Maurice Hooker.

For Saucedo, the fight could be a storybook world title win, but for Hooker, who is trained out of the Maple Ave Boxing Gym befriended by the owners Arnie and Stacey Verbeek, this too could have a lasting implication on his career.

In short, the bout is one of the good ones, one of the ones we wish we saw more of, but don’t more often than not. On Friday, as we tune into ESPN hopefully we get a good headline and a great conversation that can further drive the sport forward.