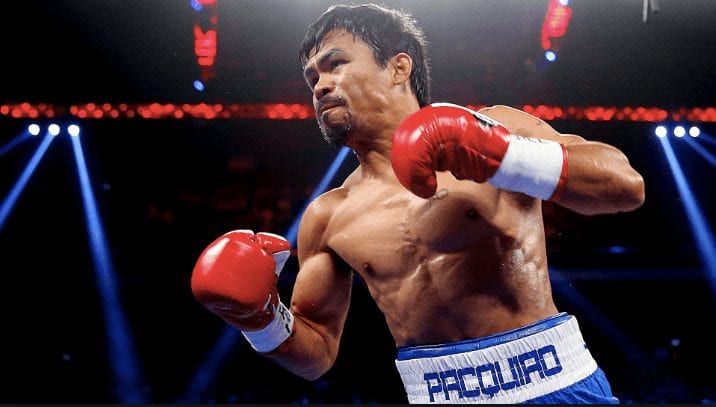 It wasn’t the first big fight I went to, but it certainly was one of the most impressionable events of my young life.

Dad was regularly comped fight tickets at the MGM, and this time we flew to Vegas to watch “The Dream Match”. Of course, there’s nothing like that buzzing, celebrity filled atmosphere in the MGM during fight weekend. But Pacquiao vs De la Hoya was more than just entertainment for a Saturday night. That fight, over ten years ago, set the trajectory of the entire boxing world and a country of over one hundred million people for the next decade.

I still remember that look on the Filipino man’s face. He was a plump figure, wearing a black blazer, shades and had a mustache. He sat about ten rows ahead. After every round, he pumped both of his fists triumphantly into the air as he looked back into the crowd. During every Pacquiao flurry, he would scream hysterically as if in a religious trance. He was basking in every moment. It was pure bliss. Manny Pacquiao was about to achieve the impossible. Round after round, the smaller but quicker Pacquiao pummeled the bigger, more experienced, and favored Oscar De la Hoya. After eight merciless rounds, Oscar sat on his stool helpless. With his supermodel wife Millie screaming with tears of devastation, Oscar’s only option was to quit. Manny Pacquiao had arrived. 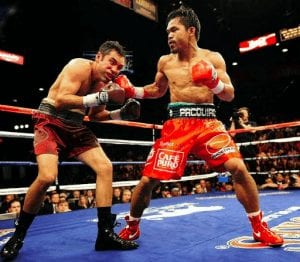 Years later, I vowed to save enough money to buy a seat to Mayweather vs Pacquiao. That day came in 2015, and I was short of the $10,000 needed to be in the house. So I did the next best thing. I had once read that Manny Pacquiao stops traffic, halts crime, and brings peace to a war torn part of the Philippines every time he fights. Even though it was finals week, at Harvard of all places, I jumped on a plane to Manila and decided to walk into the most dangerous slum in the country. Thank God a national media outlet picked up my story, and thank God I made it out alive. That was my big break in boxing.

Sometime later, I remember the day Manny Pacquiao won his Senate election in the Philippines. I was at Bob Arum’s house to discuss the state of American politics. He and I were both of the fuck Donald Trump camp, and we were then plotting candidate Trump’s downfall. But in the midst of our quixotic planning, we could not help but to stare at the Filipino news channel beaming into Bob’s living room. The pride illustrated on Arum’s face took me back to another time. It took me back to when Manny was kicking Oscar’s ass, and that Filipino guy was pumping his fists in the air.

So much had happened since December 6, 2008. But for a moment, I again felt a glimpse of what heaven must be like.

Now, Bob and Manny have split. In October, Arum said something noteworthy of Pacquiao. “Whatever he’s doing in the future, he deserves”, Arum opined.

This time, Manny Pacquiao will enter the ring, favored, but eleven years older than his opponent, Adrien Broner. AB has vowed to put Pacquiao to sleep with one punch. If he does, it will certainly mark Manny’s last time in the ring. If Manny wins, it could set up a super fight against Errol Spence, Mikey Garcia, or, dare I say Floyd Mayweather, Jr. Saturday’s fight is the type of fight where only God knows the result. But whatever Manny does in the future, he deserves indeed. Even if it isn’t two, three, or four more monster boxing paydays, 2022 is around the corner. During that time, Senator Pacquiao might become President Pacquiao. Just remember, it all started on that one night when he kicked Oscar De la Hoya’s ass in Vegas.