It's Fight Night in Mexico

Down the street from Tijuana’s famed brothels,

there is a bar with a boxing ring built into the middle of the floor. It’s standing room only here, and there is no air conditioning. It’s a midsummer’s night in Tijuana, and the only way to stay cool from the sweltering heat is to pound ice cold Dos Equis. In other words, it’s fight night in Mexico.

Felipe, a Sinaloan real estate developer who I met in Moscow, accompanies me to the fight. Felipe is a larger than life figure who, among other things, has built a love motel in TJ, owns a chain of rotisserie chicken restaurants, and has ventured into the boxing business. That night, we are there to see one of his hot shot prospects, Marcos “Chorizo” Muniz fight. Felipe leans over and tells me he signed Chorizo by paying his family $1,500 cash—a princely sum in working class Mexico.

For many years, Baja California has been seen as sort of a boxing backwater. In Mexico, Sinaloa and the nation’s capital, Mexico City, are portrayed as the traditional boxing hotbeds. However, with Jaime Munguia’s thunderous knockout of Sadam Ali last year, Tijuana has deservedly taken its place as one of Mexico’s boxing strongholds.

At the bar, it seems like Jaime Munguia’s aura is omnipresent. You can sense that the words ”Jaime” or “Munguia” are constantly being uttered in conversation all over the room. Felipe even promises me to score an interview with the champion in short time. Every boxer there that night is trying to become the next 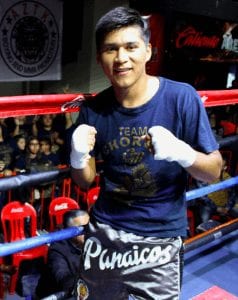 Munguia, or put simply, the next Mexican sports superstar. Felipe’s fighter Chorizo is just a kid. Officially 18 years old, Chorizo, which means sausage in Spanish, looks like he could be 12. I don’t pass judgement, because Manny Pacquiao, after all, started boxing when he was 15, and had to put rocks in his pants just to make weight. Perhaps Chorizo is the next baby faced assassin. He even looks a little like Marco Antonio Barrera, the original “BFA”.

The fights that night are unfortunately dull. Finally it is Chorizo’s turn to get into the ring. “How long do you think this fight will last?”, I ask Felipe. He says thirty seconds. Wrong. Marcos knocks out his opponent in 8 seconds with a vicious punch to the gut. He improved his record to 11-0 that night.

What, in the end, did I learn about Chorizo that night?

The honest answer is not much. In truth, I could have lasted longer than 8 seconds against Chorizo. While the jury is still out on the young “18” year old, Chorizo could very well become Mexico’s next biggest thing—under the right circumstances. He is now 13-0.

As for Tijuana, what can I say? It’s grimy and it’s ugly, yet charming at the same time. At the end of the day, boxing runs through its veins. Jaime Munguia’s rise to boxing stardom is only the genesis for Mexico’s Pacific metropolis. Do not be surprised to see Chorizo fighting under the lights at the MGM one day.