WBO welterweight champion Terence “Bud” Crawford (35-0, 26 KOs) scored a sixth round TKO over former unified super lightweight world champion Amir Khan (33-5, 20 KOs) on Saturday night before a crowd of 14,091 at Madison Square Garden in New York City, but not without some debate.

Crawford, who dropped Khan in the first round and despite eating some right hands from Khan appeared firmly in control won the bout on an odd circumstance. Crawford punched Khan below the belt, Khan dropped to his knee and eventually said he couldn’t continue, yet rather than it is a technical decision win, the bout was ruled a knockout.

A minor detail as Khan was losing every round on the scorecards, but something of note.

Lightweight Felix “El Diamante” Verdejo (25-1, 16 KOs) scored a ten round unanimous decision over former interim world champion Bryan Vasquez (37-4, 20 KOs). Verdejo got cut on his right eye, and neither fighter stood out too much in the bout

Super welterweight contender Carlos “El Caballo Bronco” Adames (17-0, 14 KOs) scored a fourth-round TKO over Frank “Notorious” Galarza (20-3-2, 12 KOs) in a bout for the NABF and NABO titles. Adames who is known for his heavy hands dropped Galarza and seconds later stopped him.

Lee Reeves makes a statement with first-round KO in Toronto 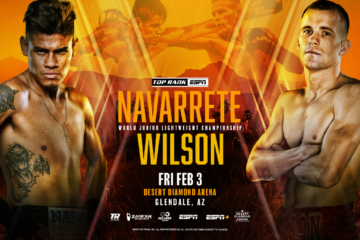