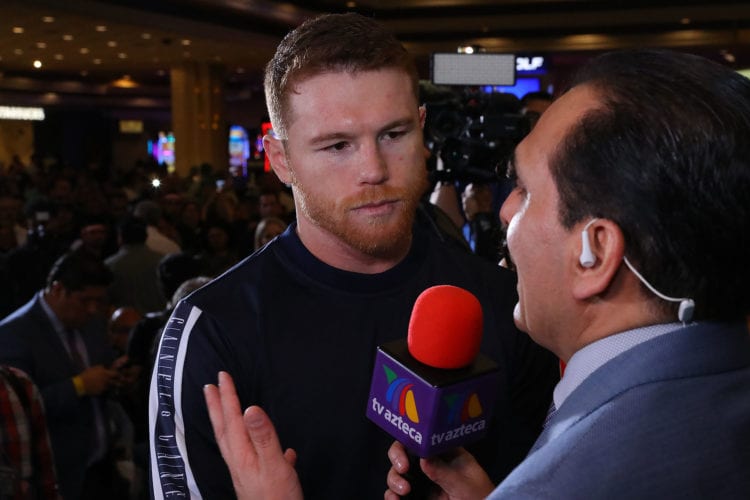 WBC, WBA, Lineal and Ring Magazine Middleweight World Champion Canelo Alvarez (50-1-2, 34 KOs) and IBF Middleweight World Champion Daniel “Miracle Man” Jacobs (35-2, 29 KOs) made their grand arrivals today at the MGM Grand Resort and Casino in Las Vegas ahead of their 12-round unification fight. The event will take place on Saturday, May 4, 2019 at T-Mobile Arena in Las Vegas and will be streamed live exclusively on DAZN.

Below is what the fighters had to say at today’s grand arrivals:

Canelo Alvarez, WBC, WBA, Lineal and Ring Magazine Middleweight World Champion
“To me, wherever I go, the people receive me with all this love and support. That is beautiful. I can’t say enough. It’s just another great experience for me.” “Every single one of my fights is important. Every single fight marks history for me. It’s another check. [Jacobs] is the second best middleweight in the world, so it’s another step in that direction, to keep writing my history.” “Yes, I have fought a lot of different styles including future HOF’ers, but Jacobs is a little different. He brings a lot of abilities and talent. It’s much more difficult. But that’s what we prepared and trained for, to come out with our hands raised Saturday night.”

On Jacobs’ reach: “I have the experience. I’ve fought taller fighters, longer, bigger. That’s what we prepared for. We had the right sparring partners, with similar styles. I have the ability to adapt to any fighter, and that’s what I’m prepared to do.” “Look, nothing’s impossible in life and much less in boxing. I’m prepared. If the KO is there, believe me, I’m going to get it. And if not, I’m prepared for whatever, including going 12 rounds.” On unifying the division: “For me, it’s the most important. Nobody in Mexico has ever done that, won all four belts in one division, so that’s my motivation. To keep writing history.”

Daniel Jacobs, IBF Middleweight World Champion
On the Vegas crowd and energy: “It seems like a huge Canelo effect but I’m excited for it. It shows you boxing is bigger than ever, and hopefully after this fight, I can win some of these fans.” “It’s the biggest fight that can be made, especially at the middleweight division. I’m looking forward to displaying great skill Saturday night and I’m looking forward to being victorious.”

“I don’t really feed into anything other than the positive – what I’ve done inside the ring, what I’ve done with preparation, my game plan with my team that we’ve formulated. All the odds, the he say, she say, I keep it to a minimum. I just focus on what the job has to be and that’s to be victorious Saturday night.” What his loss against GGG taught him: “Well, numerous things. First, you have to go in there and win a fight decisively. I don’t want no controversy. I want to be victorious, and I want all the fans to know I’m the best middleweight in the world.”

“Styles make fights. If you’re any boxing person, you know that, you know that every fight is not going to be the same. You have to approach every fight differently. If I don’t apply my best, I don’t deserve to be there. But I look forward to being victorious.”

“I’ve always envisioned getting my hand raised, I’ve always been vocal about getting the knockout, about the knockout being possible. I have an 80% knockout ratio, so if I get a guy hurt, you know I can get him out of there.” “I’m self-motivated. When everything was taken away from me, all I wanted was to get back to the sport of boxing. It’s nothing short of a miracle to get to this point. That motivates myself to be the best version of myself that I can be.”
Vergil Ortiz, Super Lightweight Prospect
“I’m really excited. It’s my first co-main event. They gave me a real big opportunity to show what I got and I’m not going to waste it.”

If he feels pressure to maintain his perfect 12-0, 12 KOs record: “I don’t feel pressure at all. As long as I win, and I look good doing it, I’ll be content.” “[Robert Garcia’s] trained many, many world champions before. He’s been Coach of the Year I don’t how many times. It just speaks for itself. He’s a great coach.”

Having never gone past 5 rounds, what does Garcia tell him in case he does this time?“He tells me it’ll actually benefit me even more. Pretty soon, I’m going to go for a world title and I’m going to need as much experience as I can to win that world title.” “In sparring, I was already going 10 rounds in February. That was two months ago. I can definitely go two more rounds if I wanted to. I’m definitely one of the hardest workers in boxing, and May 4, it’s going to show. I’m not going to get tired. I’m going to show that I can go even more rounds.” Being 140 now and going up to 147 by 2020: “It’s a big difference, but I think it’s a big difference that I can easily own up to. I’m already a big 140, so I think I’ll be a pretty good sized 147.”

Mauricio Herrera, Welterweight Contender
Being made the new co-main event: “It’s all the same, I’m ready to go. Last fight, first fight, I’m ready to put on a great show Saturday. It changes nothing.” “I think the main thing is I bring a different style. I don’t have a rhythm they can follow. No matter how they train, who they train with, they’re not going to fight nobody like me. That’s what throws them off. That’s the main plan Saturday night, be myself.”

On Ortiz Jr.’s 12-0, 12 KOs record: “It doesn’t mean nothing, it doesn’t mean anything to me. I don’t care what he does. It’s what I’m going to do. I don’t care about his record. I just want to go out there and give it my best and give a good fight to the crowd and come out with a win.”

Joseph Diaz Jr., Super Featherweight Contender
“I think my experience is going to show a lot. I know Fonseca, he’s a very dangerous opponent, it’s his first time fighting in the U.S., he’s going to give his all, but I’m destined for greatness, destined to become the champion I’m meant to be before the end of the year.” “130 is the ideal weight. 126 was very, very hard for me to make the weight. I felt a lot weaker, my body was depleted. I’m much stronger now, more lucid. I’m able to showcase my skill and my talent and it’s all going to show. I’m going for the knockout.” “We were training for anybody, we were training for the champion Tevin Farmer, Rene Alvarado, we finally got Fonseca. He’s a leftie, a dangerous left. But we trained very hard, focused on power and speed. I’m 120% ready and I’m anxious to get inside that ring.”

Getting Freddy instead of his brother Francisco: “I was shocked. I was getting ready for Francisco Fonseca. Gervonta Davis, Tevin Farmer all fought him. It was going to showcase to everybody that I belong with them. I was getting ready for him and I really wanted the fight, but turns out I’m fighting his brother. He’s a dangerous fighter too, good KO record. He’s still going to be dangerous and a very tough opponent. He’s a leftie as well, so we had to make some adjustments, but like I said, I’m ready for anything. Whatever he brings to the table, I’m ready for it.” “It’s not going to go past 6 rounds, that’s for sure.”
Freddy Fonseca, Super Featherweight Contender
“I’m very happy and grateful. We’ve been waiting for this opportunity to show people what I’m made of.” “I’ve known him, in fact I think we debuted as professionals around the same time. I know he boxes well but I think I have the power to make sure the fight ends up in my favor.”

Getting the fight instead of his brother Francisco: “Things happen for a reason. I don’t know why it happened to me, but the opportunity came to me and we’re going to take advantage of it.” On Diaz Jr. being a fan favorite: “Of course he’s the favorite. But I have the power to finish this fight in any round by knockout, and that’s what’s going to happen to Jojo Diaz Jr.”

Lamont Roach Jr., WBO International Super Featherweight Champion
“It feels great. Just seeing all these people just fills my heart that I get to perform in front of you guys and do what I love to do.” “Obviously he’s a veteran in the ring. He’s tough, he’s gritty, he has a lot of victories and a lot of experience, but that’s nothing that’s new to me. There’s been plenty of veterans in front of me. I’m definitely going to use my reach and my height but that’s not the only thing I’m going to use. My power, my speed, my mental, I’m going to put it all together and put on a spectacular show.” “It’s great. In 2016, I fought on the Canelo vs. Khan card, Cinco de Mayo weekend as well here in Vegas. I’m looking to capitalize and advance my career, advance my status, and become world champion.”

On almost becoming an engineer and what’s more difficult for him personally – physics or boxing: “I would say, for me, physics.”

Jonathan Oquendo, NABO Super Featherweight Champion “It’s nice being in Vegas, I’ve been here a lot for many great events. It’s another Golden Boy Promotions event and we’re just here and ready.” “I have no issues fighting with a tall fighter; in fact, I find it’s a pleasure. And I’m training with a lot of desire to be a world champion.” “I don’t fight in a way that’s going to be different. I always do what I can to bring damage to the fighter and we work very hard for that.”

Canelo vs. Jacobs is a 12-round fight for the WBC, WBA, Lineal, Ring Magazine and IBF Middleweight World Titles presented by Golden Boy in association with Matchroom Boxing. Ortiz vs. Herrera is a 10-round welterweight fight presented by Golden Boy. The event is sponsored by Tecate, “THE OFFICIAL BEER OF BOXING” and Hennessy “Never Stop. Never Settle.” The event will take place Saturday, May 4, 2019 at T-Mobile Arena in Las Vegas and will be streamed live exclusively on DAZN.