Though it is uncommon in boxing, since a loss in boxing can be so damaging, that is not the case on the Thompson Boxing undercard on the May 10th Friday night’s ShoBox: The Next Generation prelim bouts before television as unbeaten Ruben Torres will face undefeated George Acosta in a lightweight battle.

Ruben Torres is an eight-fight professional trained by Danny Zamora, who has won seven of his eight-bout via knockout. Torres is extremely young in his career, but show attributes that could get him to the next level of competition.

George Acosta is a tactician, who has won seven fights, but with only one by way of knockout so far. Acosta has respectable power but is being built Charles Bosecker and Oscar Sanchez to be a competitive fighter, who can compete at the highest level of the sport.

This six-round bout will be a trajectory fight that will see which fighter will continue on a title shot path and which fighter will find themselves in the developmental category for longer. Both fighters are signed to Thompson Boxing.

The bout came together after Brandon Trejo, who was set to face George Acosta and Alex Solorio who was facing Ruben Torres, both pulled out. Both, Acosta and Torres, accepted the bout last night. 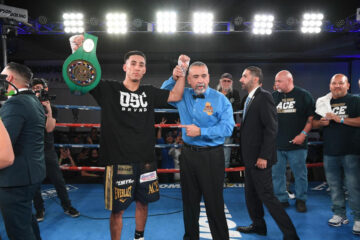