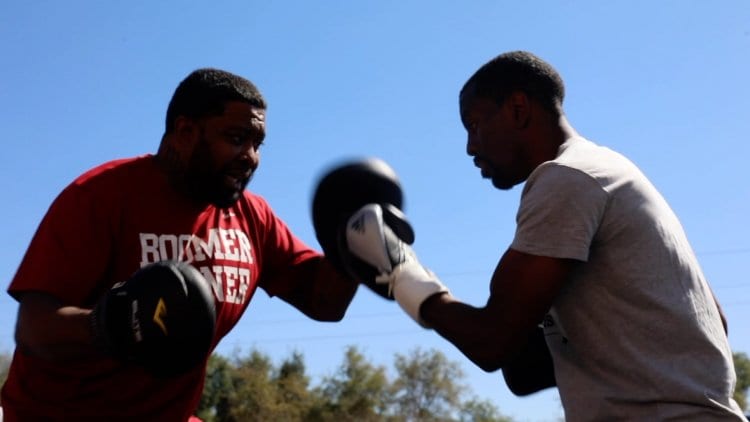 Jamel Herring is a 2012 U.S. Olympian and a Marine, one who enlisted months after the tragic events of 9/11 that re-shaped the modern era of America. Outside of Herring making a threat towards me on the internet (which was pretty amusing and funny), Herring is generally regarded as a really nice guy, and honestly, he basically is.

Herring is a smart person, who has been one of the more vocal and interactive boxers on social media and despite taking losses to Ladarius Miller and Denis Shafikov, Herring is now looking to fulfill his lifelong goal of bringing a world title back to the Marines. One that is both respectable, admirable and something young people can replicate in the very nature of setting out to do something and achieving it.

Herring defeated a who’s who of amateur fighters in 2012 including 360 Promotions’ Brian Ceballo, Desmond Brock, Jamontay Clark, Rashidi Ellis, Luis Olivares and Julian “Hammer Hands” Rodriguez all in one tournament. In fact, Herring’s only amateur career losses of note were to Frankie Gomez, the greatest what if in boxing as Semajay Thomas, a fighter who lost to a very talented Darwin Price in the pros, and not much more than that. The dude is a talented boxer, who has good distance and is tricky on the inside.

In short, despite getting bounced from the Olympics in the first round, Herring was a formidable and highly decorated amateur, that gets overshadowed by fans who never followed the amateurs like that.

Herring was a trendsetter roughly a year ago being essentially the first professional boxer (outside of Vanes Martirosyan) to leave Al Haymon as his advisor, and ditch the Premier Boxing Champions brand for Top Rank, but in typical Herring fashion, no darts were thrown as he left on good terms in a positive manner. In 2018 article with ESPN, Herring was positive with his experience towards PBC, and that is a theme of his career, professionalism in and out of the ring.

Herring, who had trained with Mike Stafford and spent time in Vegas at The Mayweather Boxing Gym, saw a trip to Terence “Bud” Crawford’s camp as a life-changing and career redefining, as he served as a sparring partner to replicate at-the-time super lightweight world champion Julius Indongo. Crawford’s coach, Brian “Bo-Mac” McIntyre saw talent in Herring during his tenure in their camp, and roughly two years later, Herring switched to training with them and promoters saw him fighting for his first world title, seemingly as the A-side despite being the opponent fighting on Memorial Day weekend, a holiday that has more meaning for him due to his service to this country, on ESPN in Florida.

Legacy on the line

Herring, who campaigned most of his career at 135 lbs has fought only once at 130 lbs defeating John Vincent Moralde via a decision in Fresno to win the USBA super featherweight title as well his last fight against Adeilson Dos Santos, Herring made a catchweight of 132 lbs. Herring, who changed his whole lifestyle to make the lower weight class, will now have his chance to show off his southpaw skill, and pedigree as he hopes to make dream come true.

Most of the time we look at fights, and say hyperbolic statements to make us feel as though this bout will be much greater than it is…but this time it is true. In short, the result of this bout can very will be the capstone of Herring career which could either be a story redemption or one of what could’ve been.

…but then there is Ito

WBO super featherweight world champion Masayuki Ito is in the same spot he was last summer, fighting in the same city of Kissimmee, Florida (just a different venue), that saw Ito defeat Top Rank A-side Christopher “Pitufo” Diaz to win the world title. Since then, Ito has made a title defense back home in Japan as Ito looks to be a spoiler, once again, in a place he probably is fond of.

It is no secret what Ito wants to do. Ito wants to come forward and put pressure on Herring and Herring wants to either box or smoother, as Ito is most dangerous in the mid-range especially with his right hand. For Herring, this bout is a way to avenge past demons of fighting pressure fighters, who have given him issues at the higher levels of the sport.

Many know of the great Bo-Mac and Red, who will be cornering Herring, but Rudy Hernandez, a cutman/trainer, is one of the best unsung heroes in the sport of boxing, not getting much press, but coaching incredibly well. Hernandez will be in Ito’s corner, as they held camp at the Maywood Boxing Gym, which is in Maywood, California, as Ito fights in a similar L.A. based pressure fighter style. The match-up quite simply is a styles contrast, and which style can prove to dominate.

We can watch a proud American, who served this country look for his last chance as a pro to make a stand and live up to the accomplishments he achieved as an amateur as Herring looks to be a world champion. Yet, we can also see the Ito, an unlikely champion might find himself in a Miguel Berchelt-like role of being a pure pressure guy, who makes a name for himself based off winning and being extremely tough.

The only certainty is a very competitive world title fight that is flying under the radar this holiday weekend.

What's Next For Ryan Martin?