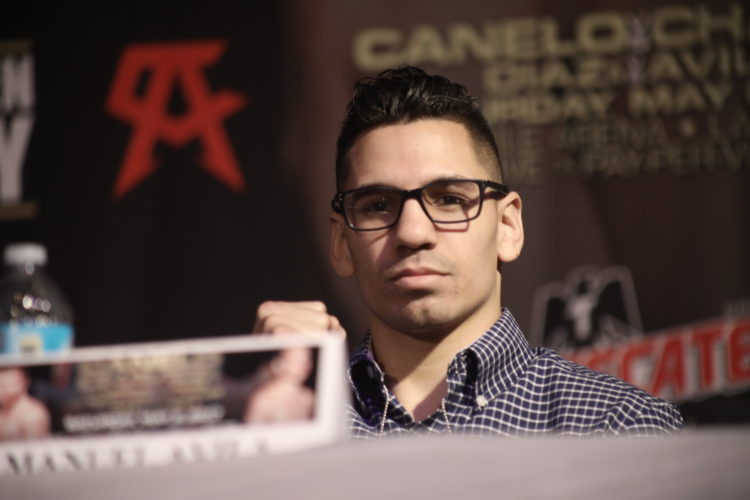 For Avila though this is a unique position in his career at only 27-years-old, he is still considered a prospect moving up into a contender position, but with a loss to Joseph Diaz Jr. on pay-per-view two years ago, and no memorable performances since, patience seems thin from his promoter as he is in a tough one against a Gonzalez, who some believe to be one of the best prospects at Golden Boy Promotions.

“I feel like people are underestimating me because I haven’t looked like myself in the ring for a while or been as active as the other fighters but this fight is different like the old Tino is back.” said Avila.

Avila was signed right out of the amateurs by his-then manager Cameron Dunkin as well as Golden Boy Promotions, at just eighteen-years-old. Avila had a difficult amateur competing in, give or take fifty amateur fights, but went on a stretch of nearly two years without fighting as he couldn’t get bouts in amateurs. Avila once recalled a story in which people would sign up to fight him seeing his government name, but when they heard his nickname of ‘Tino’, they had no interest in the bout as that was what people knew him by.

Avila has also changed gyms for this bout and promoted his longtime cutman, Phil Mondello to be his head coach working out of the Vallejo PAL Boxing gym in Vallejo, California. The essence of what the team says this camp is about is simple…back to basics.

“This camp is going great one of the best camps I’ve had so far. I can’t wait to show the fans all the hard work I have put in. I also want to thank Golden Boy Promotions, DAZN, and all the fight fans in California who will come to see this fight live.” said Avila.

Avila has also brought on a new mitt coach, Felipe Vergara, a former amateur boxer, who was a tremendous power puncher, who had to cut short his boxing career due to an eye injury. Vergara’s younger brother, Ivan, is also one of Avila’s main sparring partners.

“They’re going to see the old Tino in this fight. The one everyone fell in love with.” said Felipe Vergara on the last day of camp in Vallejo, Ca.

For those unfamiliar with Avila’s career accomplishments, he beat decorated amateur Ricky Lopez via knockout in his  fight, defeated Rene Alvarado as well as beat Robert Garcia-trained fighter Erik Ruiz with one hand after injuring the other.

That being said, Joet Gonzalez is Avila’s biggest challenge since Joseph Diaz Jr., more commonly referred to as JoJo Diaz Jr., and Gonzalez is fighting with a point to prove.

That being said, Joet Gonzalez is one of these talented young fighters, who is looking to make a statement as well as elevate into a world title fight.

“I’ve been dedicated since day one. I’m ready for the weigh in and Saturday night, I’ll come out ready. There are some challenges in Avila, he’s a good boxer. I know what he brings to the table and I know his strengths and weaknesses. On Saturday, I plan to exploit his weaknesses. It’s going to be a great fight. It’ll be an exciting card because my brother is fighting on the same card. It’s going to be the second time we’re fighting on the same card and we’re excited. I get nervous for him and he gets nervous for me but we know we’re ready. We’ll show what all that training has done. I’ve waited long enough. I want the world title shot after this fight and I believe my team will make this happen.” said Joet Gonzalez Wednesday morning at Westside Boxing Club in Los Angeles, California.

Gonzalez knows he has a lot to prove and with his brother Jousce Gonzalez on the card as well and Gonzalez is currently riding a two-fight knockout streak after his very narrow win over Rafael Rivera which was supposed to take him to the next level.

Let’s make it clear, Avila hasn’t looked good in his last few outings, and he’ll be the first to admit it, but he says dramatic changes have happened and that people are greatly underestimating him.

Keith Thurman - Does He Still Love Boxing and Will Manny Pacquiao Fight Define His Career?