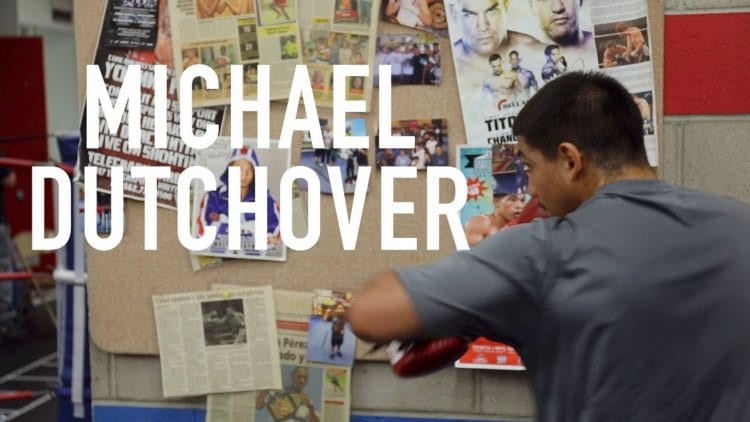 Michael Dutchover is a hardworking young lightweight from Midland, Texas, that is hard not to root for, in the sense he is talent and flat-out a nice person, and this Friday night, he will main event his first card on Showtime, as part of ShoBox: The Next Generation, facing Cleveland, Ohio’s Thomas Mattice in ten-round fight, that if all goes well, will introduce him to the general public, taking place at the La Hacienda Events Center.

Dutchover, who once told me that Midland, Texas, was nicknamed “middle of nowhere” for how isolated it is, is a small and underrepresented town that now is getting a national boxing card. An event that might rival local high-school football in the area, which is a cultural institution. In an era of hitting Las Vegas, Los Angeles, Ca, and New York, often, it is so nice to see a smaller market get a show to simply support one of their own and to get high-quality boxing shows to more people across the United States.

Dutchover, who has knocked out ten of his thirteen opponents is an explosiveness and dynamic fighter, who also has the ability to think with opponents making him a multi-dimensional fighter. Dutchover’s last fight against 15-3 Rosekie Cristobal, only lasted one round. In fact, Dutchover is riding a five-fight knockout streak with no opponent making it past five rounds with him despite each bout being scheduled for eight rounds.

Dutchover is the next wave of young fighters coming up and transitioning from a guy being talked about as being next up as he transitions into what he will become.

Yet, Thomas Mattice is no pushover. For all of Mattice’s flaws, mainly sitting on the ropes far too long and loading up on power shots, he has a lot of power, as well as a lot of heart. Mattice won a controversial split decision over Zhora Hamazaryan in 2018, only to rematch him in his next bout roughly a month or two later and fight him to a draw. The first bout was viewed as a Hamazaryan win, despite Mattice getting the victory, so the outcome of the second fight, showed improvement, despite a worse result in terms of the verdict. This is telling since in boxing, a lot of fighters especially at the developmental level, don’t improve.

Dutchover is the clear A-side fighting at home, but this is not your typical hometown fight as Mattice is a man who needs to win in order to stay the course in the fight game or his career will dramatically change. In short, Dutchover is a fighting a very motivated and hungry fighter with nothing to lose.

Meanwhile – Silently, ShoBox has had a successful last couple of years raising Devin Haney’s profile dramatically as well as placing a lot of fait in uberly talented Jaron “Boots” Ennis. After losing a large chunk, if not all of the Premier Boxing Champions roster outside of a few fighters, Showtime has bet on youth and talent, and Dutchover along with Ruben Villa, are a step in the right direction, as both are future world champions.

Dutchover, a heavy-handed Texan, who is known for sparring in the Legendz Boxing Gym in Norwalk, will look to show off what he is known for, a high boxing intelligence along with good power, as he makes his debut on national television.

Dutchover fights Mattice this Friday, September 20th from The La Hacienda Event Center in Midland, Texas. The fight will air on Showtime and should start at or around 7 PM PST