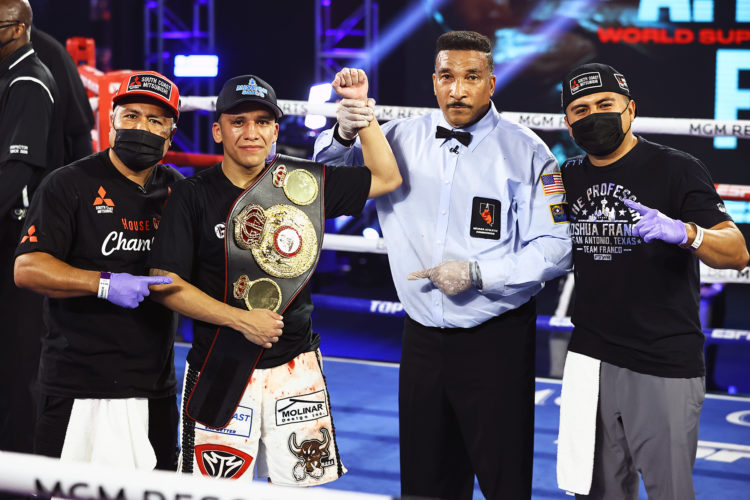 In the first world title fight after the lockdown caused by the COVID-19 pandemic, Robert Garcia Boxing Academy trained fighter Joshua “The Professor” Franco (17-1-2, 8 KOs) put together his best performance as a pro defeating WBA super flyweight champion Andrew Moloney (21-1, 14 KOs) by an unfairly narrow twelve round unanimous decision on Tuesday night at the MGM Grand in Las Vegas.

Franco fought most of the fight in mid-range and was even compared to Roman “Chocolatito” Gonzalez at times with his combination punching as Moloney struggled to adjust to the pro game fighting in an amateur fashion, while Franco landed damaging punches. Franco dropped Moloney in the tenth round. Franco clearly dominated the second half of the fight. Scores were 115-112, 114-113, 114-113.

In a clash of former world title challengers, featherweight Christopher “Pitufo” Diaz (26-2, 16 KOs) decisively beat Jason Sanchez (15-2, 8 KOs), to secure his job with Top Rank, Diaz was too fast, and sharp for Sanchez who seemed a step slower than Diaz all night. After the bout, Diaz called for a title fight.

In a clash of unbeaten lightweight fighting at a catchweight of 137 lbs., Miguel Contreras (11-0, 6 KOs) outboxed Rolando Vargas (5-1, 5 KOs) over six rounds. Vargas was cut over his right eye in the fight. The judges saw the bout 58-56 on all three cards for Contreras.

The Joseph Adorno-Alexis del Bosque bout was canceled after Adorno was taken to the Las Vegas hospital due to suspected dehydration, as the fighter who missed weight the day prior was reported to be 144 lbs the following day after not eating.