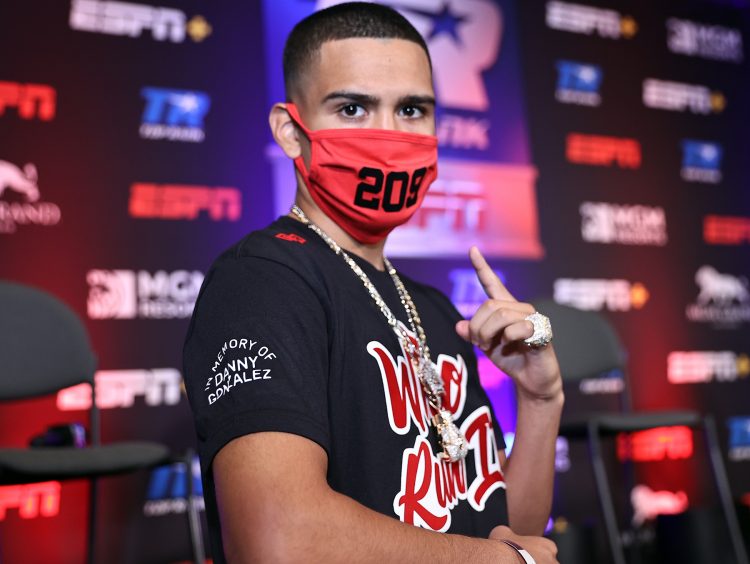 Gabriel Flores Jr. is only 20-years-old (18-0, 6KOs), but nearly has the same amount of professional fights as his age. If this was a traditional sport, Flores, who is now in the contender-status of his championship run, would be in the semi-finals as he faces Ryan Kielczweski, a man with more fights and who has fought in weight classes, Flores Jr. has never fought in, most recently at 140 lbs against Tommy Coyle.

For Flores, who moved to Las Vegas, six months ago, from his hometown of Stockton, California, the decision was strictly business. Las Vegas, being the fight capital of the world has the best sparring, and by having the best sparring he could possibly find in one city, in the world, it would seem only natural, the phenom would go to a new level.

“Everything has been great. Moving to Vegas has helped me get great sparring. We’re running up Mount Charleston. My conditioning level is outrageous. The move here really helped me,” said Flores when talking about the countless hours he has put into this camp with his father, Gabe Flores Sr.

Flores Jr., the fighting pride of Stockton will not just fight for himself, but also for all of Stockton, California when he steps into the ring. This is personified so much so that he made a major point of emphasis with his clothing sponsor, FTWR Brand, with whom he made it clear he wanted all of his exclusive gear to be available to the public.

“When I say Stockton wins we all win, so each time I win Stockton wins, and I go in there with the city on my back,” said Flores Jr. with pride. “So it is very important to me that I am able to make the people from my city and fans be able to be part of the team, and being able to wear all the gear the team wears, I feel is a big part of that.”

Flores Jr., who can always be found in the latest Versace or custom jewelry from Highline Custom Jewelry, is someone you can point at as a boxing trendsetter. From his style to turning professional at 17-years-old, Flores has been ahead of the game every step of the way.

That being said, his foe, Ryan Kielczweski, is looking to ruin all of Gabe Flores Jr.’s plans.

“I’m always in the gym, either holding the mitts or working people out or working out myself. It wasn’t really too hard to kick it back into gear and get right back into shape,” said Kielczweski. “He’s 18-0. He’s obviously a very good fighter, very fast. He’s got a lot of skill. I just can’t wait to get in there and see what happens.”

This is one of the first notable step-ups for Flores Jr., as if this bout goes successfully, he should be in a fight with a top-ten opponent in his next outing, which in all-intensive purposes should lead to a world title shot in 2021.

Flores Jr., who is managed by the legendary J. Prince and trained by Gabe Flores Sr, is looking to show why he was Andre Ward’s standout fighter of the summer series as well as why he has stayed so active during a pandemic.

Kasir Goldston - Why Mazzi Is Wise Beyond His Years