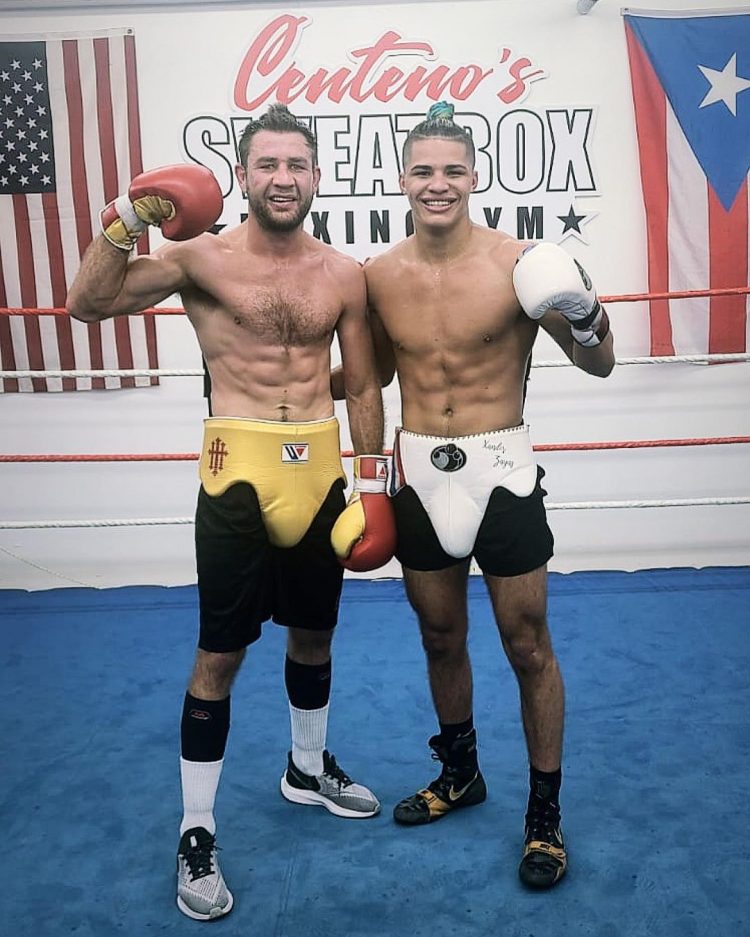 Chris Van Heerden could’ve stayed in South Africa and been a star in luxury and comfort – but that was of no interest.

For the past half-a-decade, Van Heerden has been in the L.A.-area training at the Wild Card Boxing Club, and then Churchill Boxing Club, formally known as Wild Card West. This sacrifice might seem like an occupational hazard to some, and also, a dream come true to others as Van Heerden sparred Miguel Cotto, Canelo Alvarez, amongst many other top-level fighters, but this came at a price. Van Heerden’s best friend and biggest support, his father, Daniel Van Heerden was murdered in South Africa, meaning Van Heerden missed out on spending time with one of the closest people to him, during pivotal times in his life.

“The one man who believed in me more than anyone was my father, that also two years ago this month I lost him,” said Van Heerden.”I missed five years of a relationship with my dad, because I was in America, trying to make it, which I missed out on that father-son physical relationship, which all my brothers and sisters had, and it was painful, but I knew where I was heading and what I wanted to achieve. ”

The murder of Van Heerden’s father was in-cold blood, and like most murders, senseless. The type that leaves more questions around why? Rather than any form of resolution.

Anyone who looks at this as a fight is wrong. Van Heerden, a former IBO world champion, who lost his title due to inactivity from bad management, will be fighting for the world title he once held, this Saturday, against Jaron “Boots” Ennis, on Showtime. This bout makes the decision to come to America and train worth it for Van Heerden as it creates a perfect capstone.

“Some fighters go their whole career with a chance at a world title, I am getting a second opportunity,” said Van Heerden. “…the beautiful thing is, I missed out on five years with my father for this, and I am just finally happy to say – it wasn’t for nothing!”

The man who nearly got to fight Manny Pacquiao, back when Jeff Horn fought Pacquiao, overseas when Pacquiao was having tax issues, might be best known to U.S. fight fans for his bout with Errol Spence Jr., which not unlike the Ennis fight was on late-notice, but that fight had the dreaded “camp from hell” vibe. Trainer Freddie Roach didn’t make it to the fight, Van Heerden was having disagreements with his previous manager, locking him out of the locker room prior to the bout. In essence, everything that could and would go wrong did in fact go wrong.

Van Heerden in the boxing community is well-respected as a guy who gave Miguel Cotto really hard work in the gym and was a staple of the Los Angeles boxing scene. Van Heerden just never quite got the opportunities in America until working with Peter Kahn’s Fight Game Advisors, as Van Heerden competed in the ill-fated Real Deal Promotions that was set to create a welterweight world title contender via a tournament, but seemingly the promotion seemed to run out of money, and rather silently vanished, as well as signed Top Rank Inc, having two fights with them, but never got the Terence Crawford world title fight he had hoped for.

The Crawford fight seemed a logical bout, as it would be a comparable opponent to Crawford’s arch-nemesis, Errol Spence Jr., yet Van Heerden didn’t get the bout, and was granted a release upon request. Doing what most wouldn’t do, serving ties with one of the biggest promoters in the world, Top Rank Inc.

“Boots” Ennis by many people’s estimations is the next big thing. Ennis could very well be like Spence, and Van Heerden had the misfortune of fighting to generational talents on their way up, but we don’t know. Ennis is fast, explosive, powerful, and defensively sound. Yet the last man to beat Ennis in the ammy’s was Gary Antuanne Russell, who is an aggressive southpaw. Van Heerden is an aggressive southpaw as well, just food for thought.

Though it is no A-to-B comparison, some questions will be answered one of which be; is “Boots” Ennis ready for a marquee headlining world title bout, as Spence after the Van Heerden fight fought a regional fight, Chris Algieri, Leonard Bundu, and then went for the world title unification against Kell Brook. Van Heerden is a top-tier fighter, and a win against him would mean now you’re in the upper half of the division and get you very close to the top of the division.

That being said, why is it that we always discount a man’s heart and courage? Van Heerden is fighting for something bigger than himself, and for his father, sometimes doing something like this spawns historic moments in boxing.

“Majority of people in this world miss the opportunity of success, because they refuse to take risks,” stated Chris Van Heerden at the beginning and end of our conversation, lamenting his prospect of going outside of his comfort zone to find new skills, and further his life experiences.

I know this weekend, Saturday, December 19th, on Showtime, I will be tuned in to see what will happen between Jaron “Boots” Ennis versus Chris Van Heerden, when two likable welterweights compete for the chance at greatness