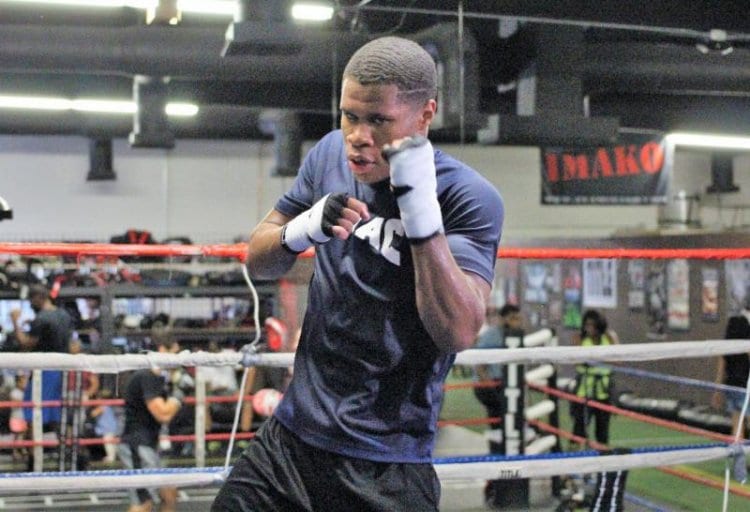 The theme of the main event, was bigger, faster, stronger, as Haney was just too young, too fast, and too talented for Jorge Linares, who applied pressure all night, but had no answers, seemingly, ever.

On top of that, Haney fought mostly in the mid-range, which has been a criticism of Haney, being too far on the outside.

Linares known as an offensive fighter, saw all of his weaknesses highlighted as Haney made it an easy night, using distance and deception to evade punches all night long and land clean punches, especially uppercuts as Haney was only throwing one or two punches at a time, beating Linares to the punch each and every time, putting forth a disciplined and beautiful display of boxing.

In short, Haney defeated a very good world champion, one of which, no other young fighters were willing to fight at this point, and dominated him. Now it just comes down to when will we see Haney in with one of the other young guns of his era, Teofimo Lopez, Gervonta “Tank” Davis, Shakur Stevenson, Ryan Garcia, or Gabe Flores Jr., in the near future.

Chantelle Cameron, A Star Is Being Created

WBC super lightweight world champion Chantelle Cameron (14-0, 8 KOs) stopped former world champion Melissa Hernandez (23-8-3, 7 KOs), as the co-feature on a major DAZN card, card an eighth-round stoppage, which one could complain about, but it was all one-way traffic for Cameron, on this given night, just sparred Hernandez from taking more punches from her opponent.

Cameron, who is trained by Jamie Moore, has good use of distance, but her biggest asset is her aggression and size. Cameron’s commitment in the gym with her being bigger, faster, and stronger than Hernandez, who just two years ago defeated a very good prospect in Selina Barrios, was a telling factor, early and often.

Outside of the main event, Cameron impressed me the most, as I see people taking to her style, personality, and look have all the intangibles for her to become a star, and with a clear rival in undisputed lightweight world champion Katie Taylor, who has become an icon in women’s boxing, especially in Europe. These two doing battle could make for a legendary affair, as Cameron feels like a future star in the sport.

Middleweight Jason Quigley (18-2, 14 KOs), defeated Shane Mosley Jr. (18-4, 10 KOs, via a 10-round majority decision, as Quigley might get the chance at a big fight, that Quigley has been wanting for some time. In the first half of the fight, Mosley Jr was more active with a jab, and landing well to the body, as Quigley’s coach, Andy Lee, the famed prizefighter, couldn’t make the fight, as “The Pocket Rocket”, Wayne McCullough, filled in, as well as Quigley wore a black-eye to the ring, before the action had started. The fight was hard-fought and competitive, but from a spectator’s perspective, it might not have been one people go back to watch for decades. Quigley did much better in the second half of the fight. Quigley’s win can be best pointed to the adjustments Quigley made from rounds six through nine, in which Quigley boxed off his back fought, showing a new dimension to his game. Some media disputed the decision and saw it as a draw or even for Mosley Jr.

Azinga Fuzile (15-1, 9 KOs), is now the mandatory for the IBF super featherweight title which is currently vacant but will have a champ in July when Shavkatdzhon Rakhimov and Kenichi Ogawa met for the vacant title in Dubai, as Fuzile stopped Martin Joseph Ward (24-2-2, 11 KOs) at 2:45, of the seventh round. Fuzile caught Joseph Ward with a check-right hook. Fuzile’s lone career loss which was a eighth-round technicial stoppage loss to Shavkatdzhon Rakhimov in September of 2019, Fuzile made it clear after the fight he wants to face Rakhimov before his career is over.

Super welterweight Amari Jones (2-0, 2 KOs), of Oakland, Ca, stopped Jonathan Burrs (3-4) in one round. Jones continues to impress as his two professional fights have only gone all of two rounds, stopping both opponents in the first round. Jones is signed to Devin Haney Promotions and showed off a good ability to keep distance with a jab, as well as a right hand from inside which closed the show.

Light heavyweight “The Big Steppa” Khalil Coe (1-0, 1KO), needed just two rounds to stop Nathaniel Tadd (2-5, 1KO), who missed weight the day prior, making the fight a catchweight. Coe dropped Tadd three times in the fight, twice in the first round, and once in the second causing the stoppage. Coe looks like a Capital G Guy. Coe wants to fight at super middleweight in the near future.

Welterweight Reshat Mati (10-0, 7 KOs), defeated Ryan Pino (8-7-2, 4KOs), in an entertaining affair most probably won’t watch. Mati riding a five-fight KO streak, and who had never been to a decision in a six-round fight, to the six-round only once, in which he stopped Dennis Okoth in his last fight, was pushed to the limit on Saturday’s undercard affair. Mati, a fast starter, was talked into a dog fight by Pino, who used trash-talk and mental warfare to get the 22-year-old into a firefight, and in the fifth and sixth round, Pino started landed a lot cleaner, as Mati’s defensive flaw later in the fight of pulling straight back started to get exploited more and more. This is a learning experience for Mati who a six-round decision with the scores of 60-54, 58-55 x2.

Featherweight Ramla Ali (3-0) defeated Mikayla Nebel (4-9, 1KO), as Ali was the faster and more seasoned fighter. Ali will have to convert to more of a professional-style to win a world title, as at age 31-year, she is too eager to exchange throwing long combinations with her chin in the air, not unlike an Amir Khan, that could be costly at the highest level. The judges saw it 60-54, the rounds were two-minutes.

The Silent Superstar: Will 2021 Be Gary Antuanne Russell's Year