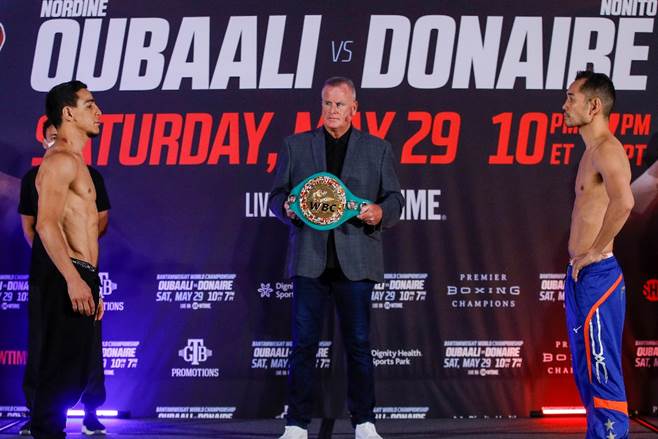 May 29th, Carson, CA – Nonito Donaire (41-6, 27 KOs), is now a nine-time world champion, as the man who one day will be in the hall-of-fame knocked out WBC bantamweight world champion, Nordine Oubaali (17-1, 12 KOs), in main event of a fight being held at the Dignity Health Sports Park in Carson, California, live on Showtime.

Donaire looked as sharp as ever, as once he got Oubaali’s timing the rest was history as went down three times in the fight, but the fateful KO happened in the fourth round, as Oubaali couldn’t get to his feet.

“The king is back,” said Donaire in the post-fight press conference.

After the fight, Donaire said that his goal is to be the undisputed bantamweight, and he wants to face Naoya Inoue again, the man who he lost to, but was a co-winner of the BWAA’s 2019 Fight of the Year.

It Is Time To Call Subriel Matias, A Capital G Guy at 140 lbs

Subriel Matias, might have an ominous fight in his past, one against Maxim Dadashev, that lead to injuries in which Dadashev would lose his life from, but Matias is one of the best 140 lbs, as he stopped Batyr Jukembayev in the eighth round of Jukembayev’s U.S. debut on Showtime.

Matias is not unlike a zombie movie, he wins by overwhelming you, not unlike the game plan of most zombies, in those said films. Matias is not a massive one-punch guy, he is a devastating volume puncher, who breaks people’s spirits, wills, and bones, as Jukembayev didn’t have the ability to keep Matias off him, and if you can’t garner his respect, it will be a hard night

2016 U.S. Olympian super lightweight Gary Antuanne Russell (14-0, 14 KOs), looked like a special next-level talent by defeating Jovanie Santiago (14-2-1, 10 KOs) by way of a knockout when the corner called an end to the bout at the end of round six. Russell dropped Santiago in the fourth round, cut him in the fifth round, and had the bout called off in the sixth. For Russell, this was his first time being taken past four rounds in his professional career, albeit he has still not gone the distance for any professional fight.

“I am looking for Adrien Broner,” said Antuanne Russell after the fight. “I come from an excellent background of fighters, I come from a dynasty [the Russell boxing family].”

The fight was just a fight, it was a statement as Broner had a close fight with Santiago in February of this year on Showtime, and Russell dominated every minute of this bout from bell-to-bell. Antuanne Russell is no longer anonymous, he is a star-in-wait.

One of the most dangerous fighters with a loss on his record, lightweight Kevin “Thunderstorm” Johnson (9-2, 5KOs), put on a dominate-and-note-worthy performance by badly beating and outclassing previously unbeaten Luis Salazar (15-1, 3 KOs), who was fighting outside of the Dominican Republic, for the first time in his career. The bout could’ve been stopped in the third round after Johnson cut Salazar and dropped him twice, but a tough Salazar refused to quit as Johnson would drop him in the seventh, before the bout was stopped in the eighth-and-final round.

Lightweight Rey Diaz (5-0, 2 KOs), who rains with Ismael Salas, won a cautionary decision over Sergio Gonzalez (3-5, 2KOs), as Diaz was dropped in the fourth-and-final round as veteran boxing reporter Jake Donovan favored Gonzalez from his ringside view.

Atif Oberlton (2-0, 2KOs), of Philadelphia, who was the 2019 Olympic Trials runner-up at light heavyweight stopped Larry Pryor (14-24, 8KOs) in three rounds. Oberlton continues to show early in his career a commitment to body shots, and also reminds me of Willie Nelson, and Paul Williams with his willingness to fight on the inside. Oberlton scored two knockdowns in the fight.