You might not know who Subriel Matias is now, but the Puerto Rican, 140 lbs, super lightweight, nicknamed “Browny”, might be someone over the coming years, you find ending up on your tv screen more and more often.

At 17 wins with 1 lone defeat, and 16 KOs, as well as an intimidating 94% KO ratio, across 76 professional rounds, Matias is something serious.

Matias has in only eighteen professional fights defeated three undefeated fighters, and not just prospects, but rather contenders, – in Top Rank’s Maxim Dadashev, Mayweather Promotions’ Malik Hawkins, and now the promoter agnostic, but aligned with Premier Boxing Champions, Batyr Jukembayev.

Matias, burst on the scene in a tragic way, as he introduced the world to his non-stop pressure, which seems heavily inspired by the Marvin Hagler’s tactics against Tommy Hearns, as he overwhelmed Dadashev. Sadly, Dadashev was one of those special fighters, who had a will to win, so deeply, that his will was stronger than his body, as he stayed in the bout far too long, as Buddy McGirt stopped the fight in the 12th and final round. Dadashev was unable to stand after the fight, and was transported to the hospital in which he would tragicly lose his life soon there after.

It was my overlying assumption, which proved to be wrong, that, Subriel Matias, would be a fighter who never recovery from both the stigma, and tragedy of such a horrific event.

My hypothesis was somewhat proven right, when DiBella Entertainment’s Petros Ananyan, a lesser-known Russian-Armenian, with both of his losses being disputed decision, dropped Matias and won a decision on the Deontay Wilder versus Tyson Fury II, undercard on ESPN.

Further details about this fight were rumored via YouTube commenter, but unverified, who said that Ananyan, despite winning was transported to the hospital, after the bout, and has been inactive since that bout. Anayan, last week had a press release sent out stating his intentions of a return with the following and even called out Matias.

“It was very tough for me having to sit out and not fight right after the biggest win of my career, with the onset of the pandemic. I gave Matias his first loss, almost knocking him out, and now he is fighting in a semifinal eliminator for the IBF title at 140 pounds. I don’t believe that is right. In a recent interview, Matias called me a lizard and said that he was a shark. If you watch our fight, that is ridiculous. It would give me great pleasure to defeat him again.”

Matias, to me, is half-Hagler, and half-zombie. Matias is most effective when creating a zombie apocalypse, it isn’t the fear of one big shot landing, it is being overwhelmed by unfettered, undaunting pressure that adds up, and then creates a hopeless scenerio. Matias is a destroyer of wills, Matias literally creates hell in the ring, as his greatest attributes are his chin, and his volume, and combine that with underrated hand speed, and your looking at someone who no one wants to face, unless they have to.

Matias is someone you can’t box. You have to fight Matias, since he is unwilling to let you get by with potshots, with his sheer volume.

Going back to the metaphor of a zombie, which often is used as a trope in screenplays for discriminated groups struggling for rights of some kind, Matias is a constant reminder of our biggest fear, our own mortality. When you see Matias, especially after the Dadashev it is eerie the presence of the corner stoppage in his bout, especially after the Dadashev fight, and the fact that all of his major wins have been stopped in the corner.

Matias, in short, is the guy in school your mom and dad told you not to mess with it. Matias is a fighter, but he is one of the very few boxers, who is silently rising up the rankings, but while doing so has some of the elements of a Mike Tyson, in terms of the intimidation he brings to the ring.

I know, at first, I didn’t fully respect his skillset when I first saw him, but now, I know when he fights, each and every bout will be a hard one, and only the best fighters in the world are capable of beating him.

Matias is a 140 lbs problem, who very well could be a world champion by the end of the year. 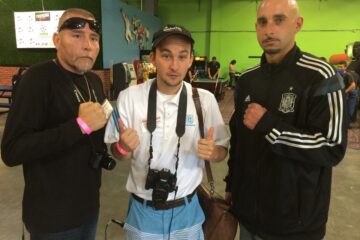