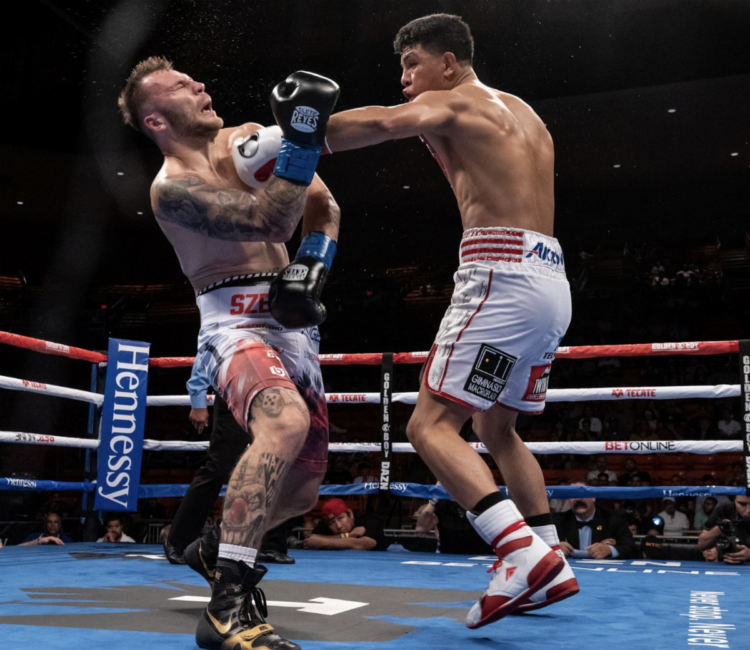 Former 154 lbs world champion, now campaigning at middleweight, Jaime Munguia (37-0, 30 KOs) stopped Kamil Szeremeta (21-2, 5 KOs) in six rounds, one round faster than famed middleweight Gennady Golovkin, to claim the WBO Intercontinental middleweight title on Saturday night at The University of Texas at El Paso’s Don Haskins Center. The fight was simple when watching it, Munguia was too strong, and Szeremeta couldn’t keep him off. Each round was its own brutal beating, until it was called in the sixth round.

The feel-good moment of the day “King” Gabriel Rosado (26-13-1, 14 KOs) picked up the career-defining win that had been alluding him all of his career as he stopped super middleweight Bektemir “Bek The Bully” Melikuziev (7-1, 6 KOs) in the third round. Rosado was down in round one from a body shot, but Melikuziev stalked forward aggressively, and one might say recklessly, before an overhand right from Rosado had Melikuziev out cold.

Unbeaten welterweight Blair “The Flair” Cobbs (15-0-1, 10 KOs) is continuing his rise to stardom with a fifth-round TKO over former prospect Brad Solomon (29-4, 9 KOs). Cobbs landed cleanly with his timing-based style, before Solomon hit the canvas and the bout was called. Solomon appeared to suffer an eye injury from the fight.

2012 U.S. Olympic Bronze Medalist Marlen Esparza (10-1, 1 KO) can now add world champion to her resume as she got off the deck in round one to dethrone WBC champion Ibeth Zamora (32-7, 12 KOs). The bout was very close.

The card was split in two halfs with the above card being shown on DAZN, and another card taking place after on Facebook Live, undefeated prospect Raul Curiel stopped Ferdinand Kerobyan in the ninth round. Curiel is fighting at 154 lbs, and is trained by Freddie Roach.