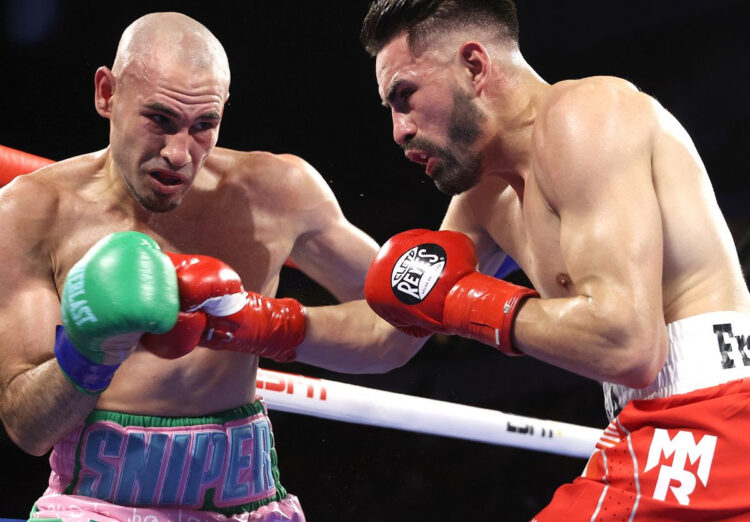 Ramirez (27-1, 17 KOs) returned to the win column following last May’s decision loss to Josh Taylor in a showdown for the undisputed title. Pedraza (29-4, 14 KOs) had some success in the middle rounds, picking Ramirez off at range and rolling off shots against the ropes. Ramirez was ahead by two points on all three judges’ cards entering the 11th, and he amped up the pressure in the final two rounds, outlanding Pedraza 28-14.

The fight served as a WBC title eliminator, giving Ramirez a clear path to a title shot if Taylor, as expected, vacates all four titles and campaigns at welterweight.

Ramirez said, “Jose Pedraza is a smart, experienced fighter. He was going to find a way to survive and put up a fight. He was there boxing towards the end of the fight.  My hat’s off to him and his team. He was well-prepared. It was a great fight. I got to see where I am right now.

“I’m going to go back, work and stay focused and stay active. That’s one thing that’s affected me these last couple of years. I’ve trained so many times for a little bit of fights. My inactivity, my discouragement throughout training camps, it really took a big toll on me. I’m ready to stay active and stay motivated. There’s a lot of really great fighters coming up to 140. There’s a lot of really good fighters at 140 right now.”

Torrez knocked down Melson three times, once in the first and twice in the second. A clash of heads opened up a cut along Torrez’s right eyebrow late in the first round, but the youngster came out swinging in the second. The second knockdown of the round, a short left hand, laid out Melson.

Torrez said, “After the cut, I knew I had to get back to basics, and that’s what I did. I made sure to avoid additional head clashes, and I got the job done in the second.

“Sure, the cut is frustrating, but I’m not going to let it ruin the celebration. What a night. It was everything I’d hoped it would be.

“I didn’t know what to expect. I wanted to make a good first impression, especially in front of my home fans. They brought the energy, and I fed off the energy they gave me. The Central Valley is home, and I am proud to represent my people.”

It was a sudden, stunning finish as two-time world title challenger Joet Gonzalez stopped Jeo Santisima in the ninth round to pick up the WBO International featherweight belt. Gonzalez (25-2, 15 KOs) landed a crisp right hand that backed up Santisima (21-4, 18 KOs), and referee Edward Collantes immediately waved off the fight. Santisima’s corner was stunned at the turn of events, as it did not appear as if the Filipino contender was seriously hurt.

For Gonzalez, it was a much-needed victory, as he was less than six months removed from a decision loss to WBO featherweight world champion Emanuel Navarrete.

Junior Lightweight: Gabriel Flores Jr. (21-1, 7 KOs) MD 10 Abraham Montoya (20-3-1, 14 KOs). Scores: 95-95 and 96-94 2x Flores. The young star from Stockton, California, Flores had a tough night at the office coming off his first career defeat. While Montoya landed many of the heavier punches, it was Flores who built the early lead and swept the final round on the judges’ cards to earn the nod. After the fight, Flores told ESPN’s Mark Kriegel that he planned on moving to lightweight.

Lightweight: Hector Tanajara Jr. (19-1-1, 5  KOs) Draw 8 Miguel Contreras (11-1-1, 6 KOs). Scores: 78-74 Tanajara, 77-75 Contreras and 76-76. In a battle of lightweights coming off their first career defeats, Tanajara and Contreras thrilled the fans with a phone booth battle that left the judges split. In the eighth round, the two exchanged vicious right hands, but neither man was seriously hurt.

Lightweight: Karlos Balderas (12-1, 11 KOs) KO 2 Aelio Mesquita (20-7-1, 18 KOs), :38. Balderas, from Santa Maria, California,  ran through the overmatched Mesquita, punctuating the fight with a right hand that knocked his foe into the neutral corner.

Middleweight: Javier Martinez (6-0, 2 KOs) UD 6 Donte Stubbs (6-4, 2 KOs). Scores: 59-56 and 58-55 2x. Milwaukee native Martinez tasted the canvas in the third round but controlled the rest of the fight to earn the wide points verdict. Stubbs was behind in the fight when he landed a right hand to Martinez’s jaw, but he could not capitalize on the temporary momentum.

Lightweight: Charlie Sheehy (2-0, 2 KOs) KO 1 Johnny Bernal (2-1, 2 KOs), 2:33. Sheehy shined in his Top Rank debut, dropping Bernal with a right hand and following up with an assault that prompted the referee to step in.

Heavyweight: Antonio Mireles (3-0, 3 KOs) KO 2 Brandon Hughes (2-1, 2 KOs), 1:02. The Robert Garcia-trained Mireles, a 6’9 puncher, prevailed in the battle of unbeaten big men. Mireles scored three knockdowns in less than two rounds and ended the fight with a combination that left Hughes wobbly and on the deck.