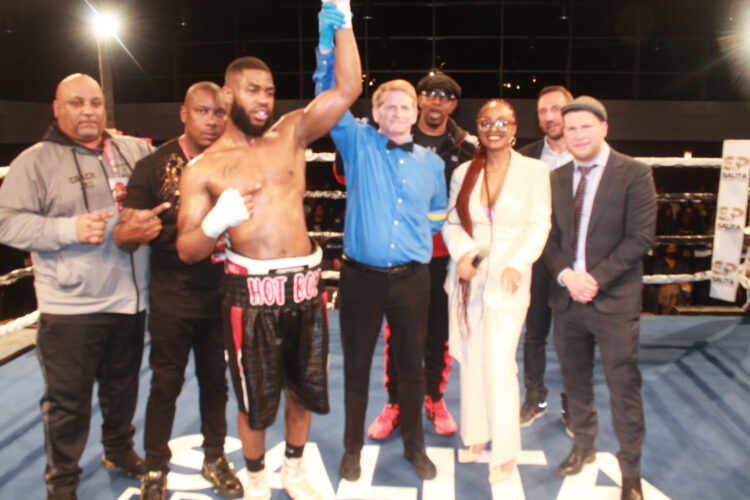 Dashon Johnson has a losing record with 49 bouts experience, but his record is deceiving. After a cautious even first round, Johnson settled into defensive mode, moving around the ring with gloves raised, and attempted for the rest of the bout to get the energetic Harris to punch himself out. Harris landed pinpoint head and body power shots, while Dashon Johnson rarely countered. However, Harris did not run out of gas. Harris dealt Dashon Johnson some head and body shots which, when viewed round after round, would have woken the dead. Any referee would have stopped the bout, the only one of the seven scheduled bouts to have gone the distance. Johnson did not have any firepower left in the last two rounds when Harris tired slightly. Harris had only one style flaw, which occurred when he crouched in low and gave Dashon Johnson a chance to attempt some counters.

Real Combat Media scored the bout 80-73 for Harris, who deserves credit for remaining active during the Pandemic and getting rounds in. Dashon Johnson came in to survive and did. Harris did not punch himself out, so the bout amounted to nothing more than ugly target practice. Dashon Johnson fought wildly to get out of clinches, his most memorable maneuver of the night.

In the other co-main event, heavyweights Moses Johnson and Robert Simms battled to a controversial draw after an accidental odd foul. Both heavyweights were punching at each other wildly in center ring in the third round. Moses Johnson threw an overhand right as Simms turned, and Simms was accidentally hit behind the head. The punch was in motion before Simms turned his head during a wild exchange, so the when the punch hit Simms in the back of the head it was accidental.

Simms went down and held the back of his head, dazed, then lay flat on the canvas for several minutes in a fog. The ringside doctors were eventually able to bring Simms back well enough to sit on a stool, but clearly he had not fully recovered. Referee Gerard White went with the Michigan rules and declared a technical draw. Three rounds had not been completed.

Simms, despite appearing grossly overweight, appeared to be winning round three and the bout at the time the unintentional rabbit punch occurred. Simms, hailing from Saginaw, Michigan, is now 11-3-1 with three knockouts. Johnson is now 8-0-1 with seven knockouts, Huntington, Long Island, New York.

Johnson accidentally fouled Simms when he hit him behind the head as Simms turned his head during a wild exchange. Simms went down and did not get up. Referee: Gerard White

World ranked Shishkin, 13-0 with eight knockouts, Detroit, Michigan by way the Russian Federation, wound up in an unexpected trouble spot when a wild overhand left from Miranda opened up a nasty bloody cut under Shishkin’s right eye. The cut did not affect Shishkin’s vision or the outcome of the bout, thanks to the masterful corner job of veteran cut man Glenn “Doc” Gilberg in the Shishkin corner.

Shiskin appeared to knock out Miranda on his back with a stomach shot near the end of round five, but referee Frank Garza ruled it a slip. Miranda came out for round six, but eventually went down when he ran out of gas.