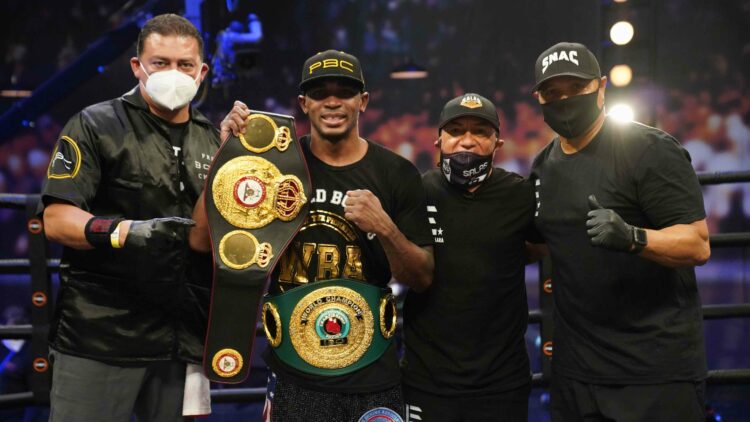 Erislandy Lara returns to the ring as the co-main event on this weekend’s Showtime PPV card. The former 154lb world champion will be defending his WBA “regular” middleweight title against Gary “Spike” O’Sullivan this Saturday at the Barclays Center in Brooklyn, New York. Lara’s nickname is “The American Dream”, and he has embodied that phrase since he successfully defected from Cuba.

Lara was a great Cuban amateur, winning gold medals at the 2005 World Championships and at the 2006 Central American and Caribbean Games. In 2007, Lara, along with two-time Olympic Gold Medalist Guillermo Rigondeaux, attempted to defect during the Pan American Games, but they were caught by authorities and arrested. Lara was favored to win gold at the 2008 Olympics, but he was banned from competing for the nation after his arrest.

In 2008, Lara was able to successfully defect. He had to walk 15 miles to a Cuban beach, and then packed into a speedboat with 25 other people on a chilling 125-mile journey to Cancun, Mexico. initially, Mexican smugglers had a $15,000 price tag in return for helping him reach Mexico and achieve freedom, but that changed once they realized Lara was a star boxing prospect. Celebrities are often charged much more than the average person, and once the smugglers realized Lara’s popularity they said he would be thrown overboard if he and his sponsors did not agree to pay a $200,00 fee once he was free.

Promoter Ahmet Ohner of Arena Box had arranged Lara’s defection, as he had numerous contacts to help aid Cuban boxers looking to defect. After extensive negotiations, one of Ohner’s employees was able to get the fee down to $40,000, and the transaction was made in a Cancun hotel. Once the payment was completed, Lara was transported to Mexico City, where he was then flown to Hamburg, Germany. Ohner has been involved in his fair share of scandals related to the sport of boxing, but his work in helping Cuban boxers escape the tyranny of their home country has allowed many Cubans to achieve success they never could have without defecting.

Lara made his pro debut in Turkey in 2008, winning a unanimous decision. After picking up his first ever professional knockout victory in his second pro fight in Germany, Lara moved to the United States and has competed in the US ever since. In 2013, he defeated Alfredo Angulo via TKO and was awarded the WBA interim Super Welterweight Championship. After defeating Austin Trout by unanimous decision later on that year, Lara was elevated to full WBA champion when Floyd Mayweather relinquished his WBA title in a return to the welterweight division.

This set up the biggest fight of Lara’s career, a 155lb non-title bout against Mexican Superstar Saul “Canelo” Alvarez. Lara got the opportunity to headline a Showtime PPV, along with earning a career high base salary of $1 million. The fight was competitive over the twelve round duration, with Alvarez being awarded the split decision victory. That result did not come without controversy, as many ringside observers and fans watching around the world felt that Lara had done enough to be announced the rightful winner. Being on the wrong side of a controversial decision wasn’t new to Lara, his first professional defeat came in 2011 against Paul Williams where even a pro-Williams crowd booed the official decision. That decision was so controversial that it resulted in all three judges receiving suspensions from the New Jersey State Athletic Commission.

After the defeat Lara continued to defend his 154lb title, notching six straight victories including handing former US Olympian Terrell Gausha his first defeat in the pro ranks. That set up a unification bout between Lara and IBF Champion Jarrett Hurd. The fight was named the “Fight of the Year” by the Boxing Writers Association of America, and a 12th round knockdown secured the split decision victory for Hurd. He has had four fights since 2019, going 3-0-1 including a draw with Brian Castaño. Since the draw with Castaño, Lara has picked up three consecutive victories, with two being early knockout wins. He has not been able to secure a marquee matchup since his fight with Castaño, and approaching 40 years old he knows that it is now or never if he is wants to secure one more major fight.

Lara will be sharing the ring this Saturday with veteran contender Gary “Spike” O’Sullivan. The fight will be a 12 round co-main event, for Lara’s WBA “regular” middleweight title. With the recent news of Gennadiy Golovkin moving up to challenge Canelo Alvarez for his 168lb titles, the winner of Saturday’s co-main event could be elevated to full WBA Champion in the near future. If he is victorious this weekend, there are still a number of viable options at 160lbs for Lara under the PBC banner. Carlos Adames, Sergiy Derevyanchenko, and former stablemate and WBC Middleweight Champion Jermall Charlo are all potential fights that I could see being made if Lara successfully defends his title Saturday night and stays at 160lbs.

Spike O’Sullivan is tough and always comes to fight, but I believe that he is going to have a hard time landing flush shots on a fighter with the defensive capabilities of Erislandy Lara. As a product of the Cuban school of boxing, Lara’s overall skillset coupled with his deceptive power has always made him a difficult style matchup for any fighter. Spike has said during the fight week build up that he plans to be the first person to beat Lara by stoppage. Whether it be a knockout or a wide points victory, I expect Lara to retain his title and look toward getting one more marquee fight before he ends his legendary career.