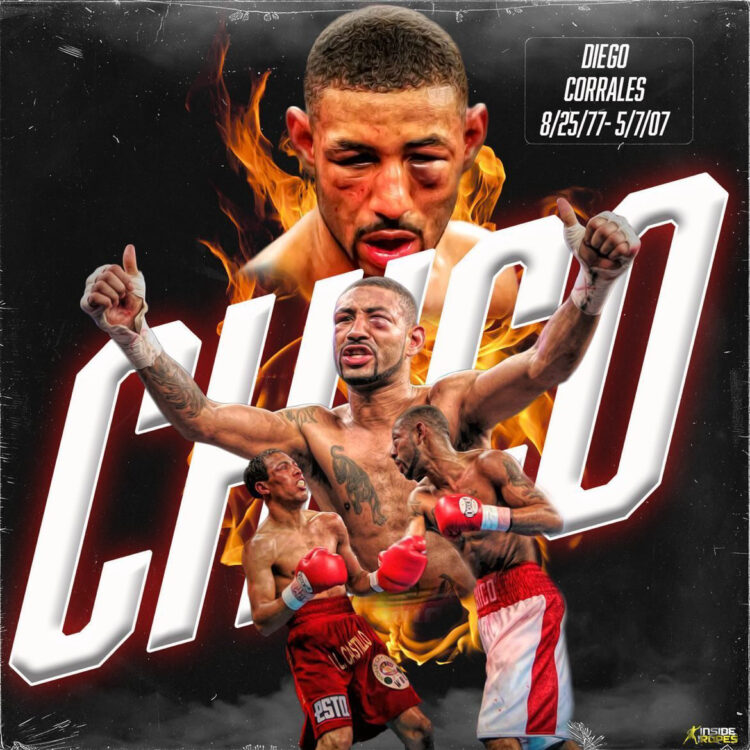 Corrales might have lost some of his biggest fights, but was your favorite fighter’s favorite fighter. Corrales fought the way most fighters wished they could fight, and had courage, conviction, and belief in himself, dawning the military colors as he literally went to war with fighters in the ring.

Most might not know this, but when Floyd Mayweather beat Diego Corrales that was one one of the major fights of Mayweather’s rise to stardom, that made one of the greatest prizefighters ever, standout. Somewhat ironic as Corrales and Arturo Gatti two fighter, who fight nothing like Floyd Mayweather were pivotal in laying the ground work to his career.

As years go on, it is easy to forget Diego Corrales, but it isn’t right – Corrales was a legend, and an icon of what courage and toughness was in the sport of boxing.

Jack Kelly: Diego “Chico” Corrales got his first world title opportunity on October 23, 1999. He entered the contest 28-0, and squared off against 32-0 defending IBF Super Featherweight Champion Roberto Garcia. Garcia was making the third defense of his IBF title, coming off of victories against Ramon Ledon and John John Molina. The two fighters exchanged blows in an entertaining affair. Garcia punched well in combinations early and kept the pressure on, but as the fight progressed, Corrales began to wear Garcia down. Corrales knocked Garcia down twice in the 6th round, and it appeared his title reign was coming to an end. A right hand in round 7 put Garcia down once again and the fight was waived off. With the victory, Corrales became the IBF super featherweight world champion and went on to compete in a number of classic fights in his career.

Lukie: This to me is the fight that sums up the great of Diego. After winning a world title he found himself in a fight with Derrick Gainer. Gainer hadn’t lost since being stopped by Kevin Kelley three years prior. With the first two rounds split on all three judges scorecards, we saw why Corrales was so great both for the fight fans and historians, as he stopped Gainer quickly in the third round, making him the most feared in the division prior to fighting Floyd Mayweather. This fight saw Corrales go to the next level as a superstar of the sport.

Nibs: This is the fight in which both participants left everything they had in both fights. Both Corrales and Castillo were hospitalized immediately after the fight and it is said that the post-fight blood and urine samples from both fighters looked like tomato juice, that should tell what kind of damage these two inflicted on one another. I could literally watch the 10th round of this fight on repeat for the rest of my life. For those who have never seen the bout, shortly into the final round Corrales was dropped with a hard left hook and spat out his mouthpiece to get a few extra moments on the break. Down again quickly after getting up Chico, the nickname of Corrales, literally just took his mouthpiece out this time and got deducted a point.

It didn’t much matter, but that deduction of a point would’ve put Castillo up on all three judges cards. What happens next is what they make movies and write books about.

Castillo with full confidence comes to the legend, Chico and catches a right for his troubles that starts at the beginning of the end. Chico now desperately starts going for the kill and after six or seven unanswered hard shots referee Tony Weeks has no choice but to stop it and award the win to Chico via 10th round TKO.

Watching this fight almost makes you doubt your own manhood. It is hard to not watch this fight and throw punches while watching the bout yourself.

Love him or hate him, Chico was your favorite fighter’s favorite fighter everyone loved and respected him while he was here and still does to this day. We may never get another fighter the likes of Diego, again. Chico never won another fight. After winning this fight and losing the rematch via 4th round stoppage after Castillo came in a pound and a half heavy, the trilogy was canceled due to Castillo again coming in overweight for the third fight and Diego and his camp not willing to make the same exceptions they did in the second fight. Unfortunately 2 years later Chico died in a motorcycle accident. R.I.P. champ.

It is truly the unfinished trilogy.

A fight labeled dangerous intentions, in which we saw Freitas forced to question if he’d like to prolong sustained punishment, and Corrales battered the fighter until he was able to continue, and some cruely would say he quit.

The fight was what we expected. Freitas outboxed Corrales in the early rounds, but was unable to outlast Corrales, who just kept coming forward and seemingly mentally broke Freitas who couldn’t handle the fact that Corrales was not getting discouraged. As Corrales would drop Freitas three times, en route to a stoppage win, and yet another come-from-behind win.

It is hard to think of another fighter who brought more in-ring drama to fights than Diego Corrales, and this fight embodies what made him so special.

The Last Moment Of Greatness

Diego Corrales vs. Joel Casamayor I

A fitting final act to the career of Diego Corrales, as Corrales would meet his equal in Joel Casamayor, a Cuban gold medalist, who loved to fight fire with fire as the two would just flat-out beat each other up for three fights. Corrales would win the first one, and Casamayor would win the last two.

It is the rare fight in which both men left the trilogy more iconic than they did before. They left it all in the ring.