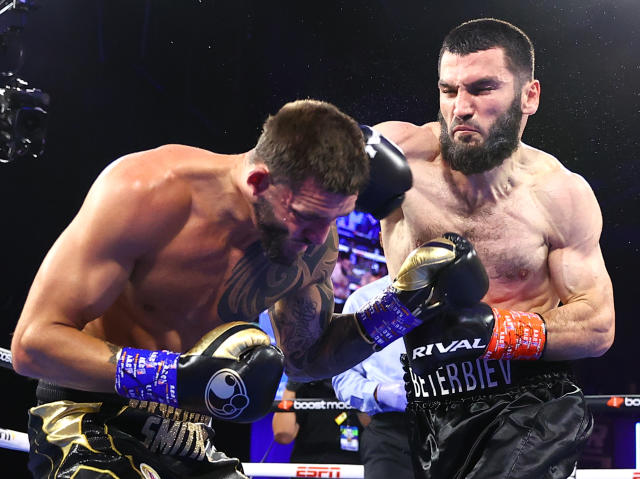 Joe Smith Jr. did all the right things to get this fight. He’s a world champion who beat multiple quality opponents, and he absolutely deserved to be on the stage he was on last night. But I had a feeling this was a bit of a mismatch.

It was all going to depend on what strategy Smith brought into the ring, and it was clear from the opening bell that he wanted to jump Beterbiev and make him uncomfortable, try to land the first big shot. Beterbiev looked mildly uncomfortable for about a minute.

And then, like in every Beterbiev fight, he landed a clean body shot and the whole attitude of the fight changed. Smith found himself on the back foot trying to defend Beterbiev’s combinations, and got dropped at the end of the first. Smith also found Beterbiev more mobile than he expected in my opinion. The more aggressive he got the greater the gap in footwork and skill became.

The second was a full on demolition, as Smith again started the round overly aggressive and walked himself right into a shot. Beterbiev walked Smith down and knocked him down repeatedly, forcing a stoppage in round two and becoming the unified light heavyweight champion. Not much else to say. Smith was out of his depth on this one, as I think the vast majority of fighters will be when they face Beterbiev.

It is really hard to imagine anybody at light heavyweight beating this guy right now. I like Zurdo Ramirez, but he gets caught clean in most of his fights and I don’t think a fight with Beterbiev would be different. Anybody else in the top 10 on boxrec seems like pretty easy work for him. The only fights that interest me are obvious; an undisputed fight with Dmitrii Bivol, and David Benavidez.

Bivol has the boxing skills to at least potentially force Beterbiev to think harder. There won’t be any “gimme” shots the way there was last night. He has the skills and the cerebral mentality to think his way through a fight with Beterbiev; whether or not he can win, I’m not sure. Benavidez presents a different type of speed and combination punching, as well as durability, than any other fighter at light heavy, and while he hasn’t moved up in weight yet, I’m just going to assume that will happen at some point.

Regardless, I think that Beterbiev (18-0, 18 ko) may be an all time great light heavyweight, and after a performance like this I hope he gets credit for being more than a stationary, come forward fighter. He is much more than that. At 37, maybe still in his prime, his footwork is great and he sets his shots up, rarely leaving himself open. This is not a David Lemiuex, Deontay Wilder type of fighter. This is a guy who’s power is so great that he rarely needs to unveil his full arsenal. And I think that’s what makes him so dangerous.

On the undercard, Robeisy Ramirez (10-1, 6 ko) walked down and dominated Abraham Nova (21-1, 15 ko) in a fifth round knockout. This was a different Robeisy than I have ever seen. Normally, Ramirez fights in a very typical, defense first Cuban style with an incredibly high skill level, but in this fight he walked down the bigger Nova in a high guard and overwhelmed him physically. I was surprised at this tactic, but he managed to avoid taking punishment and showed a different wrinkle to his game by fighting in such an aggressive stance. He obviously hits hard, and he raises his level to his competition. Nova is by far the best fighter he has been in with, and Robeisy turned his most dominant performance. Now that we know he can fight like this when he needs to, I think Ramirez should be in the mix for a title shot at featherweight sooner than later. I like his chances against any of them.