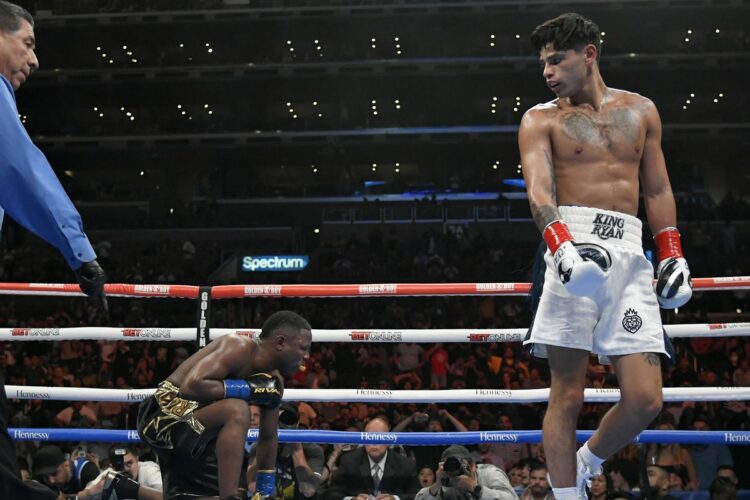 Last night Ryan Garcia (23-0, 19 ko) stopped Javier Fortuna (37-4-1, 26 ko) in round six of a one sided fight. But for starters, I think the performance of Fortuna should be addressed.

I have been watching Javier Fortuna for the better part of a decade. I was at his controversial decision loss to Robert Easter Jr. back in 2016, a fight he performed very well in. In general, Fortuna has always been an explosive, awkward puncher who fights with a high level intensity. That fighter was nowhere to be found last night.

This is not to discredit Garcia, but from the opening bell Fortuna looked committed to avoiding the fight. He was passive and circled the ring without offering any real offense to deter Garcia from walking him down. And when Ryan finally put his foot on the gas, all it took were a few strong combinations to get Fortuna out of there, and finally in round six Fortuna was counted out.

It is hard to analyze the performance of Garcia when the opponent brought so little to the table, but I will say this; as dominant as he was, Garcia still looks uncomfortable fighting southpaws. There were times he pulled straight back against Fortuna, who was unable to capitalize but a better fighter could. He also hasn’t quite figured out the front foot battle, as a lot of times he tries to punch with his front foot on the inside of Fortuna’s, reaching across his body and reducing his own power. A more skilled southpaw like Lomachenko would be able to cut angles on this version of Garcia pretty easily.

That being said, King Ry has fight changing power, a really nice jab that he probably doesn’t use enough, and at 23 is truly still developing. In many ways I appreciate his desire to fight the best, but I think we the fans and his team know he is probably not ready for those kinds of fights. I do think however, he needs to fight someone that will present real resistance, because win lose or draw that is the only way for him to develop. And good on him for making Fortuna look like easy work.

If he is committed to staying at 140, there are plenty of those kinds of opponents for him, be it Sandor Martin, Regis Progrias who is also in need of an opponent, Arnold Barboza, Montana Love, Subriel Matias, Mario Barrios, you name it. And it is time for him to get in the ring with strong, legitimate guys at 140 if he wants to develop as a fighter.

When it comes to Ryan Garcia, I fall somewhere in the middle. I’m not a hater and I definitely don’t see him as just a social media fighter. He is much more. But on the other hand, I am not “wow’d” by a lot of what he brings to the ring technically. But I am there to be sold, I just need to see him in with someone who offers real resistance. Until then, I will keep falling somewhere in the middle.

No Lightweight Superfight? Ryan Garcia vs Arnold Barboza Should Get Made Next