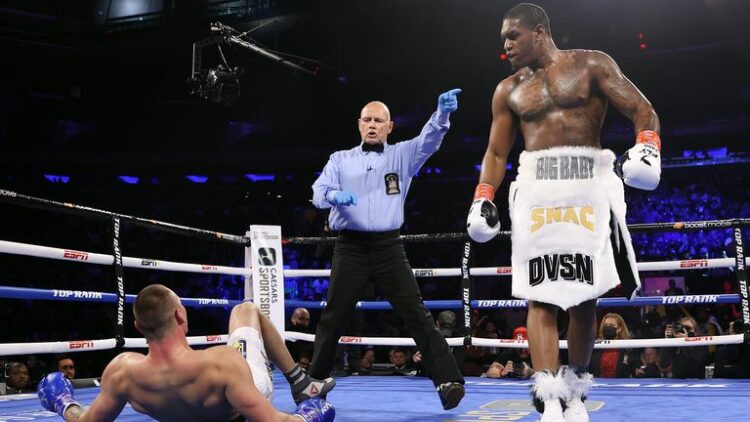 After a career long layoff, Jared “Big Baby” Anderson (11-0, 11 KOs) returns to the ring this weekend at the Hard Rock Hotel in Tulsa, Oklahoma on ESPN. He fought four times in 2021, with the most recent one being on Heisman Night in December. He picked up the two best victories in his young career at the end of the year, and had a lot of momentum as 2022 began. Anderson was set to come back on the Tyson Fury vs Dillian Whyte undercard this April, but he had to withdraw from the fight due to injury. He is set to be the co-feature on Saturday’s card, with former world champions Jose Pedraza and Richard Commey squaring off in the main event.

Anderson got the opportunity to fight in a Pay-Per-View event last October as he was on the undercard for the trilogy between Tyson Fury and Deontay Wilder. He handed Vladimir Tereshkin (22-1-1, 12 KOs) his first professional defeat by getting the second round TKO victory. Anderson’s skill set is why many people have tabbed him as potentially the next great American heavyweight, and that was on full display on fight night. He used a viscous body attack that wore down Tereshkin and set up huge head shots that caused the referee to intervene and stop the fight. With the victory, “Big Baby” had won his first ten professional contests all by knockout. He then turned his focus to getting one more quality fight before the end of the year.

He was able to secure another opportunity just two months later, serving as the chief support to Vasyl Lomachenko vs Richard Commey on Heisman Night at Madison Square Garden. He faced off against Ukrainian Oleksandr Teslenko (17-2, 13 KOs) in a scheduled eight round attraction. Anderson opened up as a southpaw, showing yet another dimension to his already advanced skill set for a heavyweight. Unlike most of his heavyweight peers, he uses his jab to set the offensive rhythm and attacks both the head and body of his opponent with it.

Anderson came out in round two in an orthodox stance, and kept that piston-like jab firing at the head and midsection of Teslenko. A little over a minute into the round, a straight right hand buckled the legs of Teslenko and sent him crashing down to the canvas. He made it up at the count of ten, but struggled to stand straight up and the referee rightfully ended the fight. With the win, Anderson received his eleventh straight knockout victory to begin his career.

Anderson has been fast tracked up the ranks as a pro due to his ability to learn on the job. Perhaps what has been most beneficial to Anderson in his young career has been the sparring that he has done with WBC Heavyweight Champion Tyson Fury (32-0-1, 23 KOs). He has served as the champ’s main sparring partner for his last two fights against former WBC Champion Deontay Wilder (42-1-1, 41 KOs). Rumors have circulated about Anderson getting the better of Fury during some of that sparring, which has given the young contender confidence that he can already compete at the highest level. Tyson has been supportive as his sparring partner gets more experience, and has made it known that he anticipates a lot of success in the near future.

“We look at Jared, without any question, as a future heavyweight champion.” said Fury.

In an interview with Sky Sports, Anderson spoke on the praise that he has received from the Gypsy King.

“Tyson said that he’d done an interview telling everybody that I am going to be the man.”

“He said, ‘I really believe that, you are going to take my spot’.”

“He has definitely told me that a few times.”

Having fought five times in 2020 and four times in 2021, inactivity has not been a common theme at all on the way up. But due to the injury that made him pull out of a scheduled April fight date, Anderson has found himself facing a nine month layoff, by far the youngest of his career. He returns to the ring against a quality opponent for this stage of his career, with the hope that an impressive victory can lead him toward fighting some of the real contenders in the division in 2023. His opponent is Miljan Rovcanin of Serbia, (24-2, 16 KOs) who has won five consecutive contests since losing to German Heavyweight Contender Agit Kabayel (22-0, 14 KOs).

With this being the longest stretch of inactivity in the career of Anderson, I would not be surprised to see it take him a round or two to get fully acclimated. Once he settles in, I expect to see the same Jared Anderson that we have seen so far in his brief career, an extremely skilled big man who also possesses the power to put a man down with one shot. If he picks up his twelfth straight stoppage victory, I would expect Top Rank to try and get him one more fight before the end of the year.

Despite only having eleven pro fights, Anderson has been vocal in stating that he wants to test himself against the division’s elite. On the DAZN Boxing Show, Anderson made it known that he would be keeping a close eye on September’s heavyweight showdown between Luis Ortiz (33-2, 28 KOs) and Andy Ruiz Jr (34-2, 22 KOs). Anderson said on the show that he would invite a fight between him and the Ortiz vs Ruiz winner when asked about it.

“100%”, responded Anderson when he was asked if that was a fight that possibly interested him.

“That would get me in rankings and get my name out there more, give me a bigger fan base, I would jump on it immediately.”

As long as he continues to stay active and progress, I can not say that there is a heavyweight in the next generation that I would favor over Jared Anderson. His unique skillset and high IQ are only comparable to that of current champions Tyson Fury and Oleksandr Usyk (20-0, 13 KOs). Standing at 6’4″ and weighing in at 240lbs, he has the frame coupled with the athletic ability to make for a special talent. Since Deontay Wilder revived the heavyweight division in the United States, boxing fans have been searching for the next young star who could follow in his footsteps. It appears to me, and many other boxing pundits, that Anderson has all the capabilities of becoming that guy and keeping heavyweight boxing alive in the US.