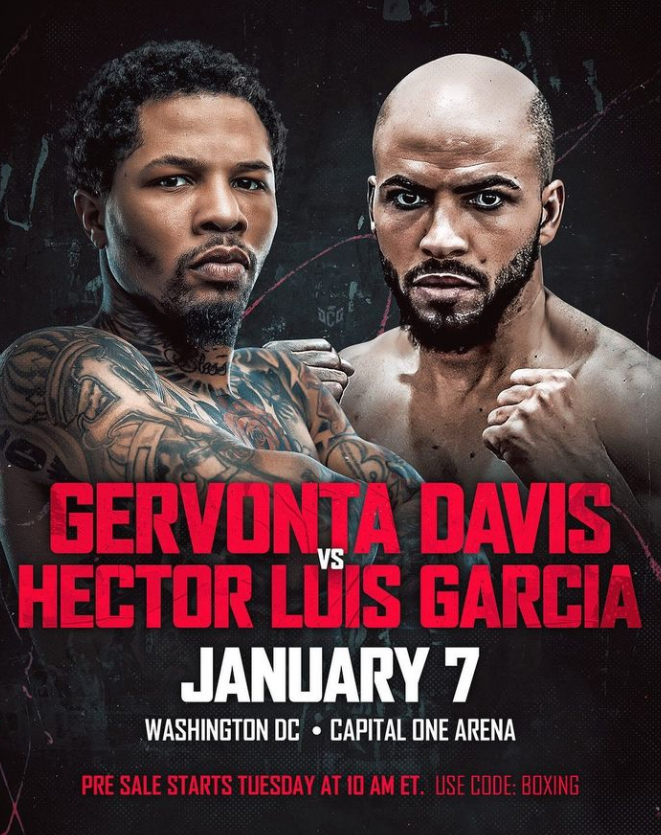 Gervonta “Tank” Davis announced via his Instagram today that he will be fighting against WBA Junior Lightweight Champion Hector Luis Garcia (16-0, 10 KOs) on January 7th in Washington DC. This fight will serve as a lead in to one of the biggest boxing events that we have seen in recent years, an April showdown with fellow lightweight superstar Ryan Garcia (23-0, 19 KOs). Without a doubt the Tank vs Ryan fight is the one that everyone is most looking forward to, but I am impressed with the decision by Davis and his team to take on such a tricky fighter in a fight that is far from your average “tune up”.

Hector Garcia made a major splash when he was thrusted into action as a last second replacement to fight then undefeated contender Chris Colbert (16-1, 6 KOs) earlier this year. He was the underdog coming into that fight, but fought nothing like one. He went on to score a wide unanimous decision win, winning ten or eleven out of twelve rounds on the judges scorecards. He knocked Colbert down in round seven and completely dominated the rest of the fight, putting the remainder of the 130lb division on notice.

Colbert had been the WBA’s interim champion before he lost to Garcia, so after the victory Hector was offered a title shot against the reigning WBA Junior Lightweight Champion Roger Gutierrez (26-4-1, 20 KOs). On the August 20th Showtime Championship Boxing card, Garcia joined fellow Dominican Alberto Puello (21-0, 10 KOs) in becoming world champions on the same night in what was a historic night for Dominican boxing. Hector Garcia was as dominant as could be in the first nine rounds against Gutierrez. The champion rallied a bit late and had some success in the last three rounds but it was not nearly enough to earn him a victory. With yet another high quality, decisive win, Hector Garcia became a dark horse in the fighter of the year conversations and a legit elite talent at 130lbs.

Gervonta Davis fought once in the year 2022, scoring a sixth round stoppage victory over then WBA #1 ranked lightweight contender Rolando “Rolly” Romero (14-1, 12 KOs). He sold out the Barclays Center on fight night and set the record for the highest grossing boxing event they have ever put on, further proving that he is a superstar that can draw fans anywhere in the country. He has sold out in Brooklyn, Atlanta (twice) and Los Angeles all in the past few years, and will be adding Washington DC and Las Vegas to that list by the halfway point of 2023. The Gervonta Davis vs Hector Luis Garcia fight will take place on January 7th, 2023 at the Capital One Arena in Washington DC. The fight will be a Showtime Pay-Per-View event, and Davis’s WBA “Regular” Lightweight Title will be on the line.

A fight between Gervonta Davis and Ryan Garcia has been a topic of conversation for boxing fans, hardcore and casuals, over the last few years. The fight was first originally discussed for 2021 after Ryan picked up the best victory of his career over former title challenger Luke Campbell (20-4, 16 KOs), but the deal fell apart when Ryan chased a potential Manny Pacquiao fight that appears to have never been a realistic option.

It is refreshing to see two guys in the prime of their careers putting it all on the line, and the winner of this fight is most likely the sport’s most transcendent star of this next generation. The fight should be explosive in the ring, with both guys compiling a combined record of 50-0 with 44 knockouts. Both guys have attributes and abilities that can cause problems to their opponents, and that will only add to the anticipation behind this mega fight. Ryan Garcia is the much larger of the two, standing at 5’10.5″ with a 70 inch arm reach, while Davis stands at 5’5.5″ with a 67 inch arm reach.

The size and hand speed of Ryan, especially his lethal left hook, can get Gervonta into some trouble if he is not defensively responsible. But if Ryan gets overconfident, the counterpunching skillset and one punch knockout power in either hand for Davis can end any fight at any moment. Both fighters have massive followings, which only enhances how major this fight is for the sport of boxing. Ryan Garcia has about nine million Instagram followers, Gervonta roughly four million, and I can guarantee that any “All Access” episodes or anything else included in pre-fight build up will have as many eyeballs on it as the sport has had in recent memory.

The Gervonta Davis vs Ryan Garcia mega fight will be contested at a 136lb catchweight, and is reported to be taking place on April 15, 2023 in Las Vegas, Nevada. Ryan Garcia is rumored to be having a fight early in 2023 before he squares off with Davis, but nothing has been confirmed yet.