Vergil Ortiz comes home Vergil Ortiz is one of Golden Boy Promotions best prospects. The welterweight prospect, who now is a contender, moved up to 147 lbs in his last bout stopping Mauricio Herrera before this past Saturday’s bout in his hometown of Grand Prairie, Texas, in which he stopped

Former super featherweight world champion Jason Sosa (23-3-4, 16 KOs) scored a seven-round technical knockout of Haskell Lydell Rhodes (27-4-1, 13 KOs) on Saturday night at the Liacouras Center in Philadelphia. Sosa dropped Rhodes twice in round five with many believing the fight would end there, but Rhodes survived into

Welterweight Vergil Ortiz Jr scored a sixth-round KO over Antonio Orozco on Saturday night at the Verizon Theatre in Grand Prairie, Texas. The fight was close, Ortiz was the aggressor early, but Orozco, known for good pressure began to push back Ortiz. In the sixth round, Orozco was dealt heavy

Unbeaten featherweight Malikai Johnson (5-0-1 3KOs) of Sacramento, Ca picked up the biggest win of his career defeating two-time national champion Ivan Vergara (8-1 2KOs) of Fairfield, Ca. The bout was scored 59-55, 59-55 and 58-56 all for Malikai Johnson. This was the main event from the DoubleTree Hotel in

Only one member of U.S.A. Boxing is coming home with gold at that is Oshae Jones, the first-ever women’s welterweight Pan-American gold medalist, as she defeated Myriam DaSilva of Canada with all five judges being in agreement in the 2019 Pan-American Games taking place in Lima, Peru. Jones now becomes 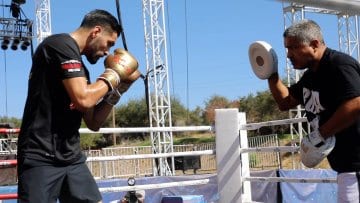 Jose Ramirez (25-0, 17 KOs) now holds two world titles after his sixth-round TKO of undefeated Maurice Hooker (26-1-3, 17 KOs) by devastating sixth-round TKO on Saturday night at College Park Center in Arlington, Texas, Hooker’s hometown. Ramirez knocked down Hooker in round one. Ramirez controlled the majority of the

Welterweight Rudy Macedo (10-0 9KOs) picked up a devastating third-round knockout last night in Tijuana, Mexico as he stopped Jose Daniel Ruiz (34-12-2 24KOs) at the Gym Bureau, Tijuana. Macedo caught Ruiz with a lead hand, left 45, a hybrid of an uppercut and a hook that dropped his opponent