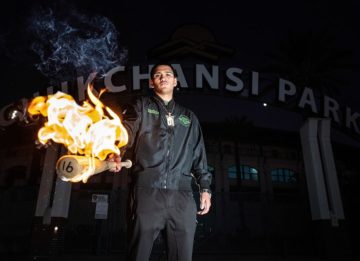 Gabriel Flores Jr. (16-0 6KOs) continues to impress with a victory over Aelio Mesquita (19-4 17KOs) in a scheduled eight-rounder as the notable bout of the evening pulling in most of the ticket sales from the Chukchansi Park in Fresno, California. Flores Jr controlled the action with fast hands, in

The WBO featherweight world title now belongs to Shakur Stevenson as he won the heated grudge match between Joet Gonzalez in twelve round bout for the vacant world title vacated by former world champ Oscar Valdez, as the two ended a contentious rivalry that was well documented leading up to

“Mr. ESPN+” Joshua Greer Jr. might be looking down the barrel of a title shot after defeating former world title challenger Antonio Nieves in a ten-round WBO NABO & WBC Continental Americas Title bout, from the Reno-Sparks Convention Center in Reno, Nevada, despite an uninspired win that most thought Greer

Josh Taylor now holds the WBA and IBF super-lightweight world titles after defeating the ever-popular Regis Prograis via majority decision at the 02 Arena in London, England. The bout was back and forth as both fighters showed their strengths and weaknesses in this bout. In the end, it seems that 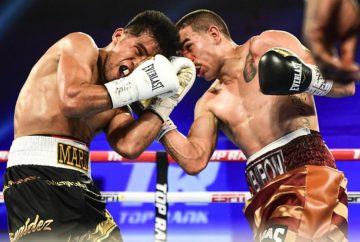 WBC Continental Americas super featherweight champion, Albert Bell picked up an eight-round decision over Frank De Alba from the Reno-Sparks Convention Center in Reno, Nevada. Bell boxed a slick and smart fight that the fans somewhat unfairly booed since it was techincal and tactical. The fans noticeably showed displeasure during

In his heavyweight debut, the last undisputed cruiserweight champion Oleksandr Usyk (17-0, 13 KOs) defeated last-minute replacement opponent, Chazz Witherspoon (38-4, 29 KOs) on Saturday night at the Wintrust Arena in Chicago. The bout was clunky as Usyk didn’t rush things in the ring. Usyk put it on Witherspoon in

Patrick Day fought to the best of his abilities on Saturday night in Chicago against 2016 Olympian Charles Conwell a super welterweight bout 154 at Wintrust Arena. Day, a well-respected veteran, who has sparred everyone in the business and has the respect of any knowledgable fighter and fan, was giving an honest

Mike Guy (11-5-1 5KOs) of Sacramento, Ca, by way of El Dorado Hills, Ca, is now coming off back-to-back big wins, as he went on the road to beat Georgia-native Eric Moon (11-2 6KOs) in a ten-round bout at the Buckhead Theatre in Atlanta, Georgia for the vacant ABF Continental

Words like “washed-up”, “over-the-hill”, “shot” or “too old” flooded the internet to slander the five-time middleweight world champion Gennadiy Golovkin, who won his fifth world title on Saturday, controversially might I add over Sergiy Derevyanchenko to claim the IBF middleweight title to boo’s from the crowd, who felt Deryvanchenko won