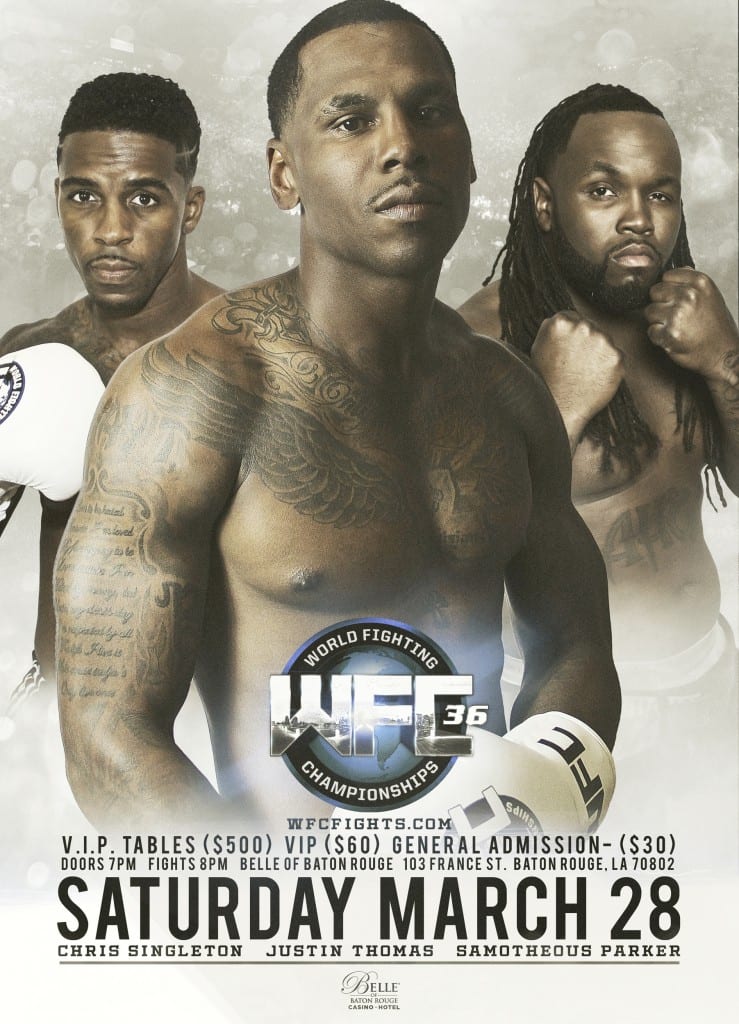 BATON ROUGE, LOUISIANA – March 19, 2015 – Boxing is back in the Capital City on Saturday, March 28th, when World Fighting Championships presents WFC 36 at the Belle of Baton Rouge.   Baton Rouge is fast becoming a fight town, with capacity crowds coming out to support the city’s local talent.  Justin Thomas (11-0, 6KO), who was born and raised in Baton Rouge, tops the card, facing Athens, Georgia’s Timothy Hall, Jr. in an 8-round Super Middleweight contest.

Thomas, who began boxing at the age of 23, had an extensive amateur career, highlighted by a win at the Houston Golden Gloves.  The fighter had moved to Houston to train, but returned to Baton Rouge in 2011 to care for his mother after she was in an accident.  “It’s been a slow recovery process,” said Thomas.  “After her accident, I decided to move home and turn pro here in Baton Rouge.  It’s a great feeling to fight in front of the people that saw me come up, who know what I’ve been through, and where I came from.”  In addition to his boxing career and a full time job, Thomas makes time to be an example to the youth in his community.  “I try to use the things that used to get me in trouble to better myself. I work with troubled kids.  Just because you start off on the wrong foot doesn’t mean you can’t turn things around.” Thomas faces a tough test in “The Boss,” Timothy Hall, Jr.  With 28 fights, Hall is the more experienced fighter, having faced stiff competition in Jeff Lacy and Badou Jack, among others.

In the co-feature, Baton Rouge native Chris Singleton (14-1, 7KO) faces Fort Worth’s Jose Hernandez (14-9-1, 6KO).  Singleton started the year strong with a second round knockout win over Gary Bergeron at WFC 33.  Slated for six rounds, the lightweight bout is a huge step up in competition for Singleton.  Hernandez has been in the ring with Mickey Bey, Luis Ramos, Jr., Sharif Bogere, Keandre Gibson and others.  “I know this is going to be a tough fight,” said Singleton.  “Hernandez has been in there with some of the best fighters out there. I’m prepared for the toughest fight of my career.”

Heavyweight Keenan Hickman is in for a tough challenge in his debut when he faces the “Mad Boxer,” Jimmy Owensby (4-1, 2KO).  Also on the card, Samotheous Parker (0-1, 0KO) seeks to avenge his debut loss against Stephen Louis (1-2, 0KO).  The two met in January at WFC 33, resulting in a unanimous decision victory for Louis.  Marcus McDaniel (12-0, 2KO) rounds out the card, facing an as yet to be determined opponent.

The boxing landscape in Baton Rouge has blossomed since WFC’s first event there in 2013.  “Every boxing event we’ve had at the Belle has sold out,” said WFC founder and Promoter Matt McGovern.  “We’re going to see a lot of great fighters coming out of Baton Rouge in the years to come.  The kids fighting in the amateurs see the professional fighters on the big stage, and they want to stay in the gym and work hard to get there as well.”  WFC plans at least three more events at the Belle in 2015.

Tickets are priced at $60 for VIP, and $30 for general admission, and are available via the WFC website at www.worldfightingchampionships.com.