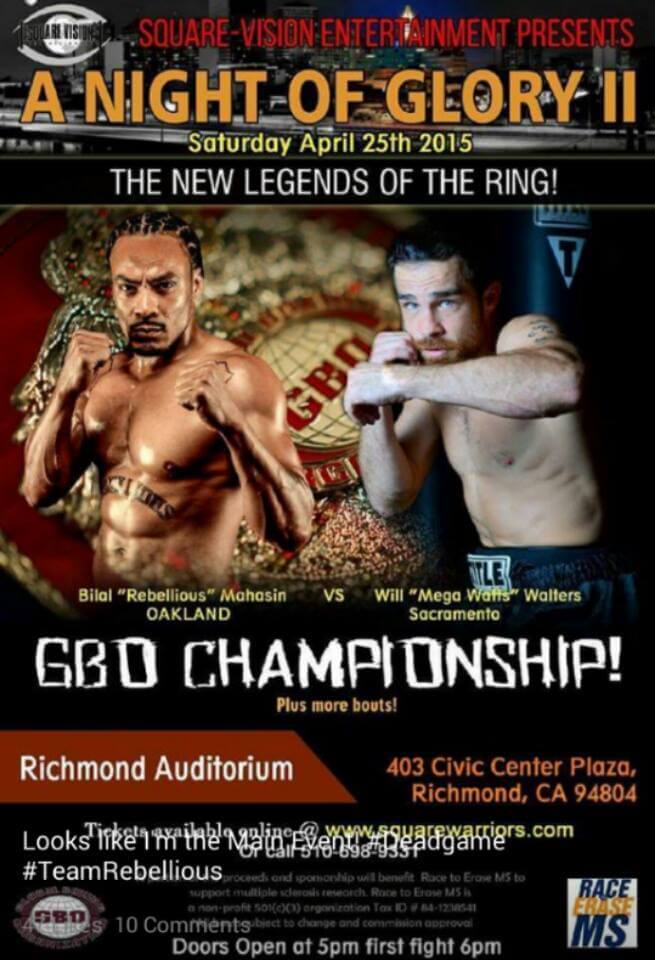 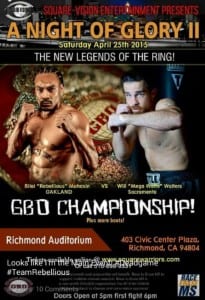 Saturday, April 25th, Squarevision Entertainment, returns with their third show in under eight months with “A Night of Glory 2” in Richmond, CA at the Richmond Auditorium. The card will be headlined by junior welterweight Bilal Mahasin (Boxing For Health) of Oakland, CA vs. Will Walters of Carmichael, CA fighting for the inaugural GBO title, a belt that Squarevision has created to entice their best fighters to fight amongst each other.

Mahasin, a man of redemption spent his 20s in multiple correction facility after a teenage robbery of store in St Louis, Missouri. Mahasin reflects upon that now as not knowing the consequences of his actions and with great remorse. Before being arrested, Mahasin was an undefeated professional boxer even fighting on Friday Night Fights, which actually is how he got arrested as he was identified from the fight.

Mahasin returned to the sport in 2012 after getting his life back together and has adapted a form of fighting that he labels “Dead Game”. The term is used more so in dog fighting, but Mahasin applies it to his style and the fighters he works with, meaning that he would rather die than give up.  Mahasin who is coming in after a draw against Abraham Lopez in Oxnard, CA in which he moved up in weight and fought at exactly the weight he walks around at 147 lbs. The result was bitter sweat as promoter Bob Arum of Top Rank, explained he thought Mahasin won as he sat watching the action.

This is the first fight in the Bay Area for Mahasin, a proud Oakland, CA native and also his first crack at a regional belt. Walters on the other hand was a good amateur boxer who has struggled to translate his game to the pros. In his last outing he was beaten by Brandon Adams after Mahasin pulled out due to injury. This in fact created some bad blood between Walters and Mahasin as in interviews Walters wondered if Mahasin was really hurt? Essentially, breaking the oath of a fighter in which you do not disparage your foe about things you’re unaware of. What makes this such an interesting main event is that, Mahasin doesn’t like Walters and Walters doesn’t like Mahasin and what more can be said.

Also on the card will be Mahasin’s team mate, welterweight O.T. “Champ” Seymore who will be fighting Mario Aguirre. Seymore who refers to himself as champ, is known for his incredibly fast hands and ability to move unlike most fighters. Champ is known for his larger than life personality, apparel he brings to the ring and his ability to want to entertain the fans as he looks to continue his knockout streak from his pro debut.

Vacaville, CA’s Adam Fiel will be back in an action after a tough outing against a dirty opponent in his last bout that left him with a gash on his nose. Fiel, a Nonito Donaire Sr. trained fighter will fight against Manuel Romero, a fighter who has a had a tough career, but brings a bit of the same physicality that Fiel’s last opponent brought. This could also graduate Fiel into six round bouts if he is able to handle Romero how he should.

Junior Welterweight Moises Benitez might keeping a keen eye on the title fight a top this card as he has a foe in front of him, Khrys Daniel that might make him look good and could vault him into title contention. Benitez, a San Jose based fighter fighting out of Dreamland Boxing Gym, fights like the Mexican warriors of the past and has even more confidence now that “Perro” Angulo told him he would be a champion.

Casey Morton returns with Squarevision Entertainment as she rematches Blanca Raymundo in a rematch from their previous fight. Morton who is looking to get that break to get a big fight in Mexico for a title fight also knows that early in her career it is tough to get fights since she is very good and has the hardest work ethic around. For those who watched “The Fight Life” episode on her you can see just how much see does and trains for.

For ticket information, go to SquareWarriors.com