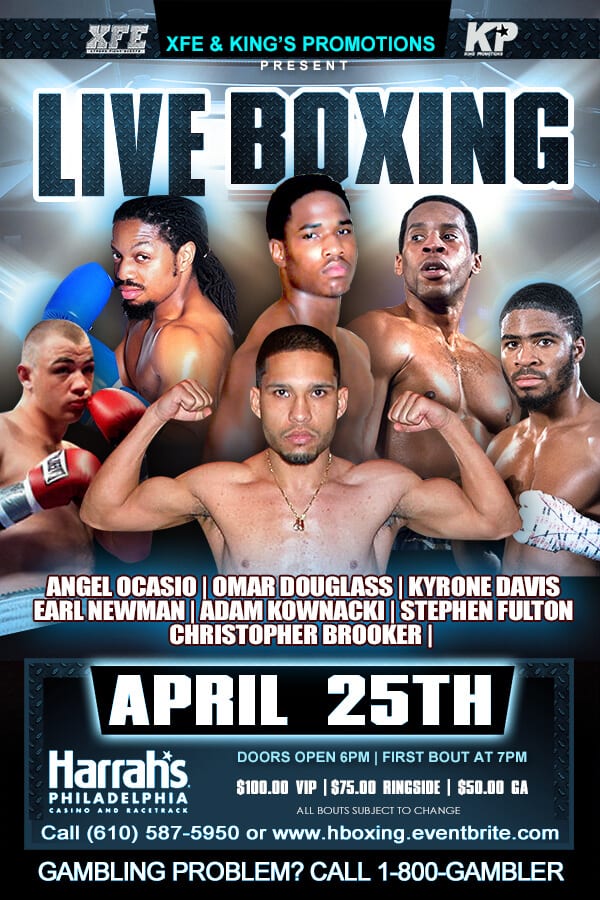 This  Saturday night, April 25, boxing returns to Harrahs Philadelphia with a terrific card promoted by King’s Promotions and XFE.

In the co-feature bout, undefeated super middleweight Kyrone “Shut it Down” Davis will look to remain perfect when he takes on veteran Carlos Garcia in a bout scheduled for six rounds.

Davis of Wilmington, Delaware will be making his second start of 2015 as he is coming off six-round unanimous decision over Jonathan Garcia on January 31 in Philadelphia.

“Training has gone real well.  I have been doing a lot of roadwork and I feel good,” said the 20-year old Davis.

In Garcia, he is facing a tested fighter who has been in the ring with eleven undefeated fighters including Michael Anderson. Jermell Charlo, Charles Hatley, Lanard Lane, Jonel Tapia, Yordenis Ugas, Glen Tapia, Daniel Rosario and in his last bout when he was stopped in five rounds

“I don’t know too much about him other than he has about 20 fights and he is six-feet tall.”

After a great amateur career, Davis is continuing to learn and grow into the professional ranks.

“I have been learning patience, timing and ring generalship.  I am getting comfortable without using the headgear and fighting with the smaller gloves and creating my identity as a fighter.”

This will be the second consecutive fight in the Philadelphia area for Davis as Harrahs Philadelphia is just up I-95 from Davis’ Wilmington home.

“I like that everyone can come see me fight.  Other than that I just go about my business and prepare like any other fight.”

Davis believes that he will be ready for bigger stages in the next year.

“We are progressing.  We are hoping for a television spot later in the year.  I just want everyone to come out and support us on Saturday.  I will shut it down like I always do and put on a great show.”

Said Davis’ adviser Stephen Edwards, “Kyrone is progressing great.  He has has 20 round of professional experience and he has not lost any of them,  He is right on schedule and is getting used to the professional ranks.”

Adam Kownacki (8-0, 8 KO’s) of Brooklyn, NY will try to keep his perfect knockout streak going when he fights Randy Easton (3-6-1, 3 KO’s) of Sunbury, PA in a heavyweight bout. 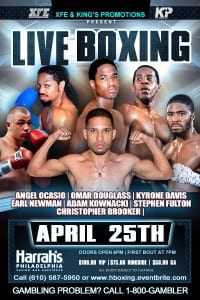