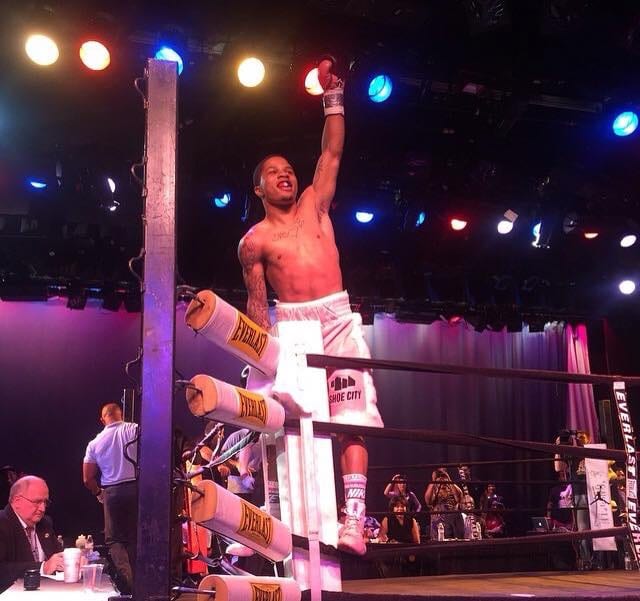 On Friday night, May 22, 2015, undefeated professional boxer, Gervonta “Tank” Davis needed just one minute and fifteen seconds to defeat Mexico’s Alberto “Ironman” Mora by TKO at the Claridge Hotel in Atlantic City, New Jersey. The fight was scheduled for eight rounds, but Davis landed an uppercut just a few seconds into the fight that floored his opponent. Mora beat the count, but still appeared to be hurt. Davis then backed him up with a body shot, and followed up with a combination that knocked out Mora’s mouthpiece. The referee waived the fight off at 1:15 of Round 1. With the win, Davis’ record improved to 11-0, with 10 KOs, while Mora’s record moved to 5-4-0, with 1 KO. The Kings Promotions fight card, entitled “Rumble At The Claridge,” was held at the hotel’s Celebrity Theater, and was not televised. In the main event, Brooklyn’s Juan Dominguez defeated Mexico’s Marco Macias by TKO in Round 2.
In his previous fight on February 20, 2015, Davis defeated Puerto Rico’s Israel “Macho” Suarez (Puerto Rico/pro record: 4-5-2, 1 KO) at the Consol Energy Center in Pittsburgh, Pennsylvania, winning by knockout at 2:13 of Round 1. Moments into the fight, the twenty-year-old Davis dropped Suarez with a barrage of punches, ending the contest after just 47 seconds.
Davis’ boxing trainer Calvin Ford (Upton Boxing Gym) said, “We had a solid game plan going into this fight, and we were prepared to go extra rounds with this opponent. Gervonta’s skills proved to be too much for him, and it turned out to be a short night. We’ll enjoy this win for a day or so, get some rest, and evaluate how we have to improve for the next fight. We will continue to build on this win. I want to thank all the people that bought tickets and came to the fight to support our team. It was real comforting to fight out of town and see so many familiar faces in the crowd.”
Gervonta Davis talked about his fight. He said, “I trained to go the full eight rounds, but in boxing, you don’t get paid for overtime. I missed landing an uppercut in the first few seconds of the fight. I landed it a few seconds later, and that was the first knockdown. He got up from that one. I hit him a few more times after that, and the ref stepped in, and stopped it. I dedicated this fight to Valerie Barnes, who lost her life this year to cancer. I wore pink Nike HyperKO Boxing shoes, and a pink, white and black uniform with her name written on the back of my trunks. My best friend (Barnes’ son), Justin “Fiddle” Carter, was at the fight. After I won, the ring announcer spoke to the crowd about the dedication, and we brought “Fiddle” to the ring. It was just a real special night for us. I really wanted to win this one for Ms. Val.”
Davis added, “Thanks to my manager, Al Haymon, and promoter Marshall Kauffman of King’s Promotions, for allowing me to fight on Friday’s card. Thank you to my team, Shoe City, Yekim Customs, Tvche, Everlast, Nike Boxing, Athlete Performance Solutions, Ethika, Baltimore Parks and Recreation, and Upton Boxing Center for being a big part of Team Davis. Thank you to everyone in Baltimore who came to my fight on the Team Davis bus trip, or drove from Maryland and other states. I appreciate all the media that came to see me fight. Because of the events that happened recently in my city, this win was a real positive moment for all of us. It shows kids that dreams can come true. It feels great to be 11-0. Keep supporting me, and I’ll fight for you.”

GERVONTA DAVIS CRUSHES HUGO RUIZ IN ONE ROUND