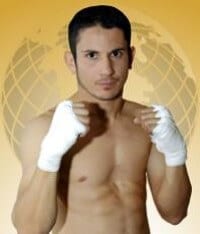 Mauricio Herrera (21-5 7KOs) finally wins his own debatable decision as after five rounds of action the judges awarded him the bout over Hank Lundy (25-6 12KOs) with the scores 48-48, 48-47 and 48-47. Herrera who seemed flat for the brief period of the fight was still able to earn the decision win which will place himself in line for something major in the future as he is one of Golden Boy Promotions biggest stars at the current moment. Herrera has been prone to “robberies” since losing bouts to Danny Garcia and Jose Benavidez Jr. in tough fights to score.

The fight played out many predicted as it was ugly.  An early head butt open up a cut on Herrera in the first round. The second round wasn’t much better for Herrera who was rocked by a Lundy punch that stunned him. The next two rounds saw Herrera come back in typical fashion, awkward and creating a bunch of problems with his jab for Lundy.

As expected, the fight ended in bizarre fashion as the cut to Herrera saw the fight come to a halt in the fifth round per referee Jack Reiss’ wishes.

The co-main event saw Michael Perez (22-1-2 10KOs) pick up a sixth round knockout win over late replacement Luis Sanchez (17-3-1 5KOs) for the vacant WBO NABO lightweight title. A straight left put Sanchez on the canvas, the title should get him ranked by the WBO for the world title in the near future. Perez’s lone loss was to former WBC lightweight champion Omar Figueroa Jr.

In the opening bout of the telecast, Joseph Diaz Jr.(16-0 10KOs), commonly known as Jo Jo Diaz Jr., earned a decision over game vet Rene Alvarado (22-4 15KOs) with the scores of 98-91, 96-93, 95-94. Most ringside pundits had the fight dead even reflecting that the first scorecard was not reflective of the fight despite Diaz dropping Alvarado in the first round.