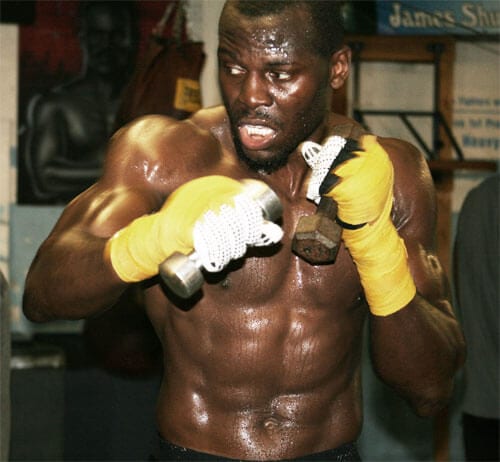 Tickets for the event, which is promoted by DiBella Entertainment in association with Warriors Boxing and Huck Sports Promotion are priced at $150, $100, $70 and $45, not including applicable service charges and are on sale now via Ticketmaster.com, charge by phone at 1-800-745-3000 or any Ticketmaster outlet. Tickets may also be purchased at Prudential Center’s box office.

Here is what the participants had to say Tuesday [Editor’s Note: Tarver did not attend media day]

“I’ve done enough talking. Now, we are only three days from the fight.

“We both signed a contract to inflict bodily harm on each other for 12 or less rounds. When the smoke clears, we’ll see who’s left standing.”

“I did the cruiserweight thing, I was the top of the food chain. I want to do it somewhere else. Heavyweight is the next challenge.

“This is a big challenge. Tarver has made history. That’s the kind of challenge I like. Heavyweight is a bigger challenge than cruiserweight. These guys are supposed to be bigger and stronger than me. I’m very competitive, and that pushes me during training. The challenges keep me going.

“It’s great to be fighting again at Prudential Center. This is familiar territory for me. I’m trying to pick up another win. It’s right up the street from us, and we’re looking to drive home happy Saturday.

“I fought in Europe so much, fighting this close to home is a little scary. There are a lot of eyes on you. But that’s what we do. We handle pressure and do what we do. If a fighter doesn’t have nerves, they’re either lying or don’t have it in them.

“I just have to keep putting in work. I’ve had lot’s of close fights; everyone knows how it’s gone down, and I’m good with it.

“I think I’m ready for a title right now, but it’s up to the media and fans. We’ll see how the performance goes. If you see a good performance and you demand it, I’m ready.”

“I don’t really concern myself with my opponents. My only worry is if he is a southpaw or orthodox. A lot of people say they’re in they’re in the best shape of their lives, but they all come crashing down.

“The only thing I need to know is that I am going to beat him come Friday night. I want my opponents to adjust to me because I am the world champion.

“I take all of my opponents seriously. It is disrespectful not to, and he’s very well-ranked.

“Training in Las Vegas was tough at first. Obviously coming over from Europe, we’re not used to the heat. I even doubted if this was the right decision but looking at it now it was the perfect decision. We’re in great shape, and we adjusted well to the temperature.

“When I eventually go back up to heavyweight I want to fight the top guys right away. Maybe I’ll go fight Deontay Wilder, that is definitely an interesting option.

“All our focus is on Friday night and our victory.”

“Huck is, of course, the favorite because he’s a world champion. After I beat him, I will be a favorite too.

“People are afraid of Huck’s power but I’m not. What I want is a hard fought battle and winning by knockout in the final round. This is my dream, and I will make it happen.”

“My trainer Ronnie Shields is exactly right saying that I’m here to knock Consuegra out. This is what I will do on Friday.

“I worked hard in Houston during training camp. I have the energy to fight 15 rounds if necessary. My speed and not wasting any of my punches will be the difference.”

“It’s a big deal for me to fight in Prudential Center. I started my US career here in 2011 and now fighting in Newark means a lot to me.

“I would like to show everybody how good I am offensively. A little more time and I will be able to challenge for a world title.”