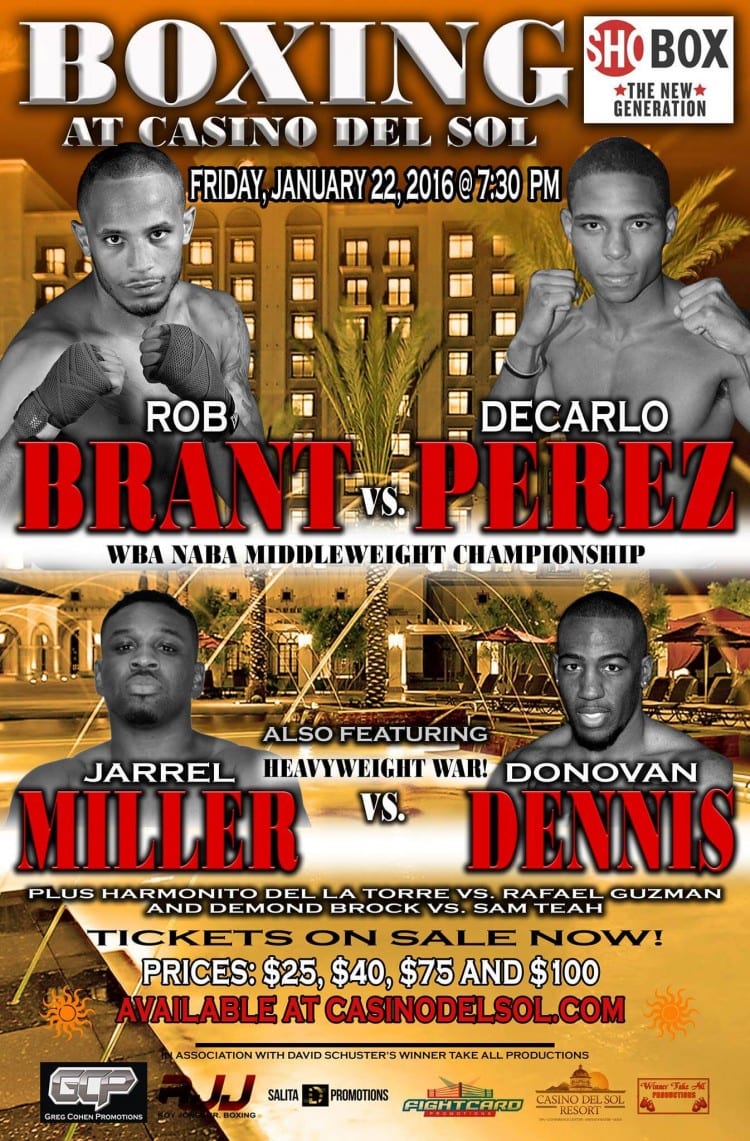 ShoBox: The New Generation returns to the Casino Del Sol in Tucson, Arizona, since their last card in in March of 2012. The card is being promoted by Greg Cohen Promotions in association with Roy Jones Jr Boxing, and will feature a stacked card of competitive fights. The main event will feature undefeated Rob Brant (18-0, 11 KOs) against tough and talented, Decarlo Perez (15-3-1, 5 KOs) for the WBA NABA Middleweight Championship. “I’ve got a very serious opponent in front of me. He rates about a 7.7 at everything, which doesn’t leave a whole lot of weaknesses. I’ve got to go back to pure boxing for this one. I have to be better in every department. It’s my second time headlining ‘ShoBox’ and I plan on improving from the first time so viewers can chart my progress. This is my time to show my growth.” says Brant referencing the tough task ahead of him this weekend.

Also on the card will be a fun heavyweight attraction with undefeated Jarrell Miller (15-0-1, 13 KOs) up against Donovan Dennis (12-2, 10 KOs) for the WBA NABA Heavyweight Championship. Dennis is looking to get back into the big mix after losing in the ESPN Boxcino Heavyweight tournament finals. The under card will also feature plenty of entertaining bouts.

Making his Unites States debut, Filipino Harmonito Dela Torre (17-0, 12 KOs) will take on Mexico’s Rafael Guzman (16-1-1, 10 KOs) in what should be an action packed Lightweight bout scheduled for 8 rounds.

Both fighters will be making their pro debut when Carlos Cordova of Tucson, AZ, goes up against David Courtney of Phoenix, AZ, in a four round Welterweight bout.