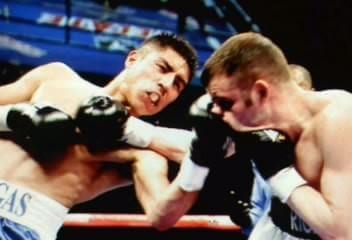 After the decision was read in which Manny Pacquiao beat Timothy Bradley officially for the second time, Jessie Vargas had some choice words for both combatants leaving the MGM Garden Arena as he spoke with Elie Seckbach and Sean Zittel of ThaBoxingVoice.com in a video featured below.

Vargas explained that though Pacquiao won, he just didn’t have the killer instinct that he once had and no longer looks to finish fights as he is content to just outclass opponents and go to a decision.

“[Tim] Bradley is looking for a way out and doesn’t seem like he is going to give me the fight, so my next option and the only thing [that I can do] is to do what he couldn’t do, so of course beating Manny Pacquiao would be a huge way to put [Bradley] down.”

Vargas’ ill-will toward Bradley comes from a controversial finish to his fight with Tim Bradley last year at the StubHub Center in Carson, CA. Vargas had Bradley hurt with 10 seconds left in the fight, the ref stopped the bout only to have the fight decided upon the cards not allowing to see if Vargas could of won the in the last few seconds of the round.

Vargas is now waiting to see if he can land a big fight in 2016 after stopping Sadam Ali to win the WBO welterweight champion, currently Tim Bradley and Manny Pacquiao are ranked #1 and #2 in the division for his mandatory title defense.

*CAN TERENCE CRAWFORD BEAT PACQUIAO? GET TERENCE'S ANSWER AND REACTION TO PACQUIAO/BRADLEY! 3*