Soto Karass-Kamegai fight to a draw in LA 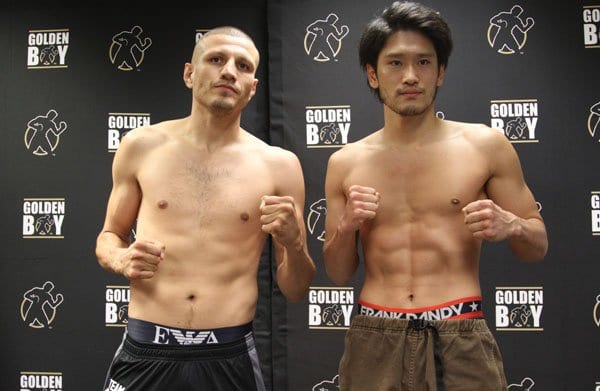 In a heavily anticipated battle between two brawlers moving up a weight classes to meet at super welterweight, Jesus Soto “Renuente” Karass (28-10-4, 18 KOs) and Yoshihiro “Maestrito” Kamegai (26-3-2, 23 KOs) battled to a back and forth draw on Friday night’s LA Fight Club card in downtown Los Angeles’ Belasco Theater. Both men were offended if you didn’t hit them as defense was thrown to the side and punches came in wide and hard. The judges scored the bout 97-93 Kamagai, 96-94 Soto Karass, 95-95.

Unbeaten light heavyweight Vyacheslav “Lion Heart-Chigonsky” Shabranskyy (16-0, 13 KOs) was victorious over middlweight Derrick “Superman” Findley (23-19-1, 15 KOs) who moved up to light heavyweight and was unable to answer the bell for the fourth round. Shabranskyy picked Findley a part before dropping him in the third round, a round Findley barely survived before calling it quits.

Soto Karass-Kamegai fight to a draw in LA