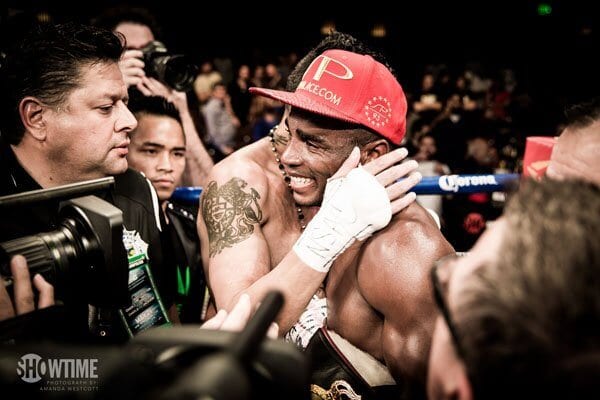 WBA super welterweight world champion Erislandy “The American Dream” Lara (22-2-2, 13 KOs) outboxed avenged his draw to Vanes “The Nightmare” Martirosyan (36-2-1, 21 KOs) by picking up a twelve round decision win on Saturday night at The Cosmopolitan of Las Vegas. Lara was elusive like always and caused problems for Vanes who at times overpowered Lara. Vanes was deducted a point in round eleven for a low blow. The judges scored the bout 115-112, 116-111, 116-111 all for Lara.

Reigning IBF junior middleweight world champion Jermall Charlo (24-0, 18 KOs) retained his title with a twelve round unanimous decision over former world champion Austin “No Doubt” Trout (30-3, 17 KOs). Charlo appeared to have the faster hands and the stronger punches, but as the fight went on Trout began to surge back into the fight, but simply was too far behind to win the fight. The scores were 115-113, 116-112, 116-112 all for Charlo.

In the opening bout of the Showtime telecast,  Jermell Charlo (28-0, 13 KOs) became the WBC super welterweight world champion as he scored an eighth round KO over John Jackson (20-3, 15 KOs), in a fight that Charlo was losing up until the KO. A Charlo hook folded Jackson, whom fell into the ropes and the referee waived the bout off.