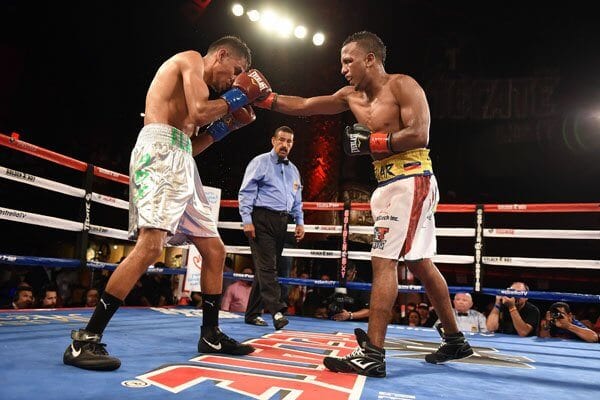 Colombian prospect Oscar “Jaguar” Negrete (15-0, 5 KOs) continued to show why he is a a force to be reckon with as he won a unanimous decision over Jose “Flash” Bustos (11-7-3, 7 KOs) in the main event of the Friday night event at the Belasco Theater in downtown Los Angeles headlining the LA Fight Club Boxeo Estelar on Estrella TV. Negrete dominated the early rounds as he busted up Bustos in the later rounds, Bustos would be a tad bit more active , but still did not appear to win any clear rounds on our scorecard.

Super bantamweight Emilio Sanchez (13-0, 9 KOs) continued his winning ways against a game Hugo Partida (20- 8-2, 15 KOs) as the two fought to an eight round decision. Sanchez pressed the action to start landing good uppercuts that hurt Partida , but the game veteran refused to drop and even push Sanchez to the limit in the fight

In the television opener, super middleweight Niko Valdez (2-0, 2 KOs) scored a fourth round stoppage over Michael Andrews (0-2) in a scheduled four round bout opening up the Estrella TV telecast. Valdez’s class showed as he overwhelmed Andrews to get the stoppage.