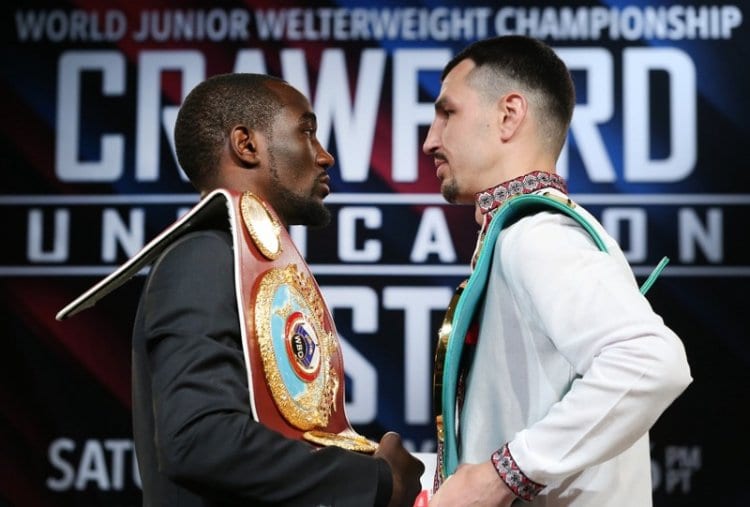 As every fight fan already knows, 140lb title holders Victor Postol (28-0 12KO’s) and Terence Crawford (28-0 20KO’s) will engage in a title unification match up on July 23rd at the world famous MGM Grand in Las Vegas Nevada.  This legacy defining fight will be televised live on HBO PPV and is promoted by Top Rank.

Victor Postol is the current WBC Super lightweight world champion and is currently regarded as a top two super lightweight by many boxing fans and analysts.  Last October, Postol won his world title by defeating hard punching Argentine slugger Lucas Matthysse in devastating fashion.  It was a battle in which Postol showed boxing ability, ring IQ and punching power all in the same fight.  Postol is a native of Ukraine and has an extensive amateur background. He is listed at 5’ 11 in height and possesses a reach of 73 ½ inches.  He is extremely big for the super lightweight division and has world class boxing ability and a beautiful long jab that he loves to work off of.  He also knows how to use the ring well and has great footwork.  He first appeared on HBO when he fought Turkish Slugger Selcuk Aydin. It was a virtuoso performance In which Postol worked off his jab and moved well in the first half of the fight breaking and slowing the Turkish slugger down, then gradually sitting down on his punches to finish Aydin late with a KO.

Since winning that fight against Prescott as a late replacement, Top Rank and HBO started to give Crawford more attention.  Crawford ended up dropping down to lightweight and eventually took on and defeated WBO lightweight champion Ricky Burns in his backyard in Glasgow Scotland to claim his first world title. He then went on to defend it against Yuri Gamboa and Raymundo Beltran before moving back up to super lightweight.  Since moving back up to super lightweight, Crawford managed to win the vacant WBO title by defeating Thomas Dulorme.  He then went on to defend it against Dierry Jean and Hank Lundy.  It is obvious that Crawford’s opposition hasn’t been world class since his move up to the super lightweight division.  Not only does Victor Postol serve as Crawford’s first elite level opponent at super lightweight, but he also serves as Crawford’s biggest opponent physically.  For the most part, Crawford has been fighting naturally smaller fighters then him. The best fighter he has beat thus far in his career is Yuri Gamboa, who is a natural featherweight who they brought up to lightweight in order to lose to Crawford. Gamboa is no doubt a great fighter but I take that win with grain of salt since I don’t find it impressive when a big lightweight beats a natural featherweight.

However, Crawford is not taking any more short cuts and is looking to unify the division and prove he is the best! This fight is what boxing is all about! The two best fighters in the division going at it in unification fight, the best versus the best!  Fights like this should be a normal thing in boxing and as a fan of the sport I would like to thank the two fighters and Top Rank for putting together this fight because it’s fights like these that keep the sport of boxing alive and healthy.