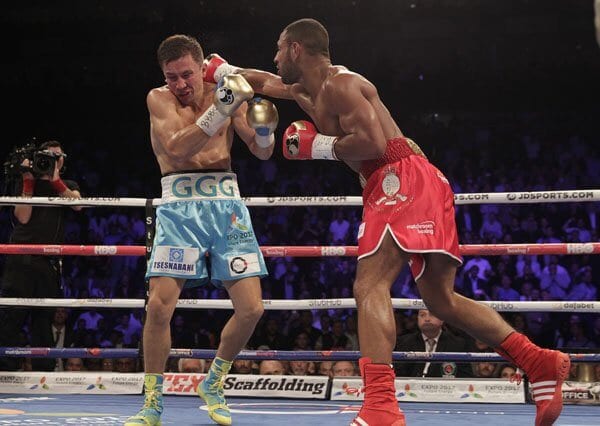 WBC/WBA/IBF middleweight world champion Gennady Golovkin (36-0, 33 KOs) retained his titles with a fifth round TKO over IBF welterweight champion Kell Brook (36-1, 25 KOs) on Saturday night at the O2 Arena in London. Golovkin who pulled Kell Brook up two division to fight him hurt him early in the first round, before wearing him down with his naturally bigger size. In typical, Golovkin fashion the middleweight was offended if you didn’t hit him , but against a naturally smaller fighter, it had no consequence despite being off-balance against Brook who was boxing well despite the huge size disadvantage.

In the fifth round, Brook’s orbital bone (eye socket) was badly damaged and the corner threw the towel in despite Brook fighting back.

In the co-main event, IBF bantamweight champion Lee Haskins (33-3, 14 KOs) was given all he could handle as he faced Stuart Hall (20-4-2, 7 KOs) in what was a very close bout. Haskins landed the clearer punches, but Hall constantly walked forward and pressed the action and seemingly wasn’t rewarded for that. The judges saw the fight 115-113, 117-111, 116-112 all for Haskins.