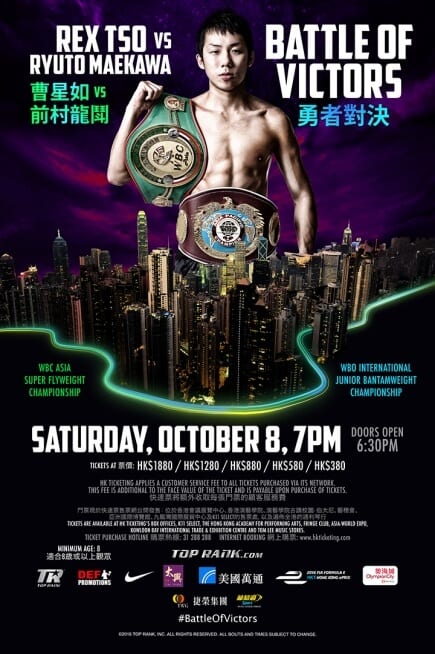 REX “THE WONDER KID” TSO is set for his highly anticipated return to the ring at “Battle of Victors” on Saturday, October 8th. Co-promoted by top Hong Kong boxing promoter DEF Promotions and world-leading boxing promoter Top Rank, Battle of Victors is sponsored in part by Formula Electric Racing Hong Kong Limited, and will be one of the highlights of the FIA Formula E Hong Kong ePrix weekend (8-9 October).

Tso (19W – 0L, 12 KO), coming off a resounding victory against top Korean Young Gil Bae on May 14th, 2016, is scheduled to face fellow undefeated fighter Ryuto Maekawa (11W – 0L – 1D, 7 KO) of Japan for the vacant WBO International Junior Bantamweight (115 lbs) title. The always-dangerous Maekawa, rated #2 in Asia by the WBO Asia-Pacific, is a highly regarded prospect training out of the fabled Watanabe Gym and is managed by former world champion Yoko Gushiken, who made 13 successful title defenses. Maekawa, coming off a stunning 1st round KO victory in March, is known for his speed and counterpunching.

With an audience of more than 5,000 and eight scheduled bouts with fighters from Australia, Japan, the UK, Thailand, the Philippines, Indonesia, Nepal, Hong Kong, and Macau on the fight card, Battle of Victors is set to be biggest professional boxing event in Hong Kong history. Also on the card are Rex Tso’s stablemate Raymond Poon, “The Macau Kid” Ng Kuok Kun, and white-collar standout TOM TAW of the UK, who is set to face former Indonesian bantamweight champion Marco Tuhumury.

Battle of Victors will be the Saturday evening entertainment for the inaugural FIA Formula E Hong Kong ePrix event. The world-class racing event will attract a large number of overseas visitors, and almost all tickets for the two-day racing event are sold out. Mr Alan Fang, CEO of Formula E Racing Hong Kong Limited, commented on this unique sports-entertainment collaboration, saying, “Our partnership with DEF Promotions and Top Rank reinforces our vision of making the inaugural Formula E HKT Hong Kong ePrix weekend the highlight of Hong Kong’s social and sporting calendar. We are confident that the confluence of world-class sport in this premier fight card and the on-track action at the HKT Hong Kong ePrix will provide a compelling weekend of entertainment for both local and international visitors.”

Top Rank is working with DEF Promotions to organise its second-ever event in Hong Kong, with Battle of Victors marking Top Rank-signed boxer Rex Tso’s milestone 20th professional bout. Hall of Fame promoter Bob Arum of Top Rank said, “I am very pleased to see Rex Tso emerge as a big star in this part of the world. Rex is world-rated and we expect to see Rex continue to succeed and impress in the ring and to become one of the big stars in Asia.”