Lukie Ketelle
0 0 0
WBO Middleweight World Champion Billy Joe Saunders will make the second defense of his crown against New York’s Willie Monroe Jr. on Saturday, September 16th at London’s Copper Box Arena, live on BT Sport and BoxNation.
Hatfield’s Saunders (24-0, 12 KOs) defeated Irish hero Andy Lee to take the WBO strap in a close and absorbing fight back in December 2015 that saw the undefeated star floor the former Champion twice in the third round and go on to claim a majority decision from the judges.
A series of injuries led to a frustrating 2016 for Saunders, but he eventually defended his belt last December against Artur Akavov in Glasgow. Saunders was not at his best but outpointed the game, Russian. He was due to take on Avtandil Khurtsidze before the Georgian’s arrest in June.
Monroe Jr (21-2, 6 KOs) has a second chance at winning a World Title after a sixth round stoppage loss against IBF, WBA and WBC Middleweight World Champion Gennady “GGG” Golovkin back in 2015. Since then the 30-year-old has won two decisions over John Thompson and Gabriel Rosado and holds a number five World ranking with the WBO.
“I am happy for this World Title opportunity,” said Monroe Jr. “I’m always in the gym and I’m ready to go now; I live the life. I can’t wait to show up and show out in London. Saunders is a good fighter and a worthy World Champion but I’m coming for that belt.”
“I gave a good account of myself against Golovkin, but I will admit that I got caught up in the moment. Billy Joe has had a lot of luxuries throughout his career that I haven’t had. All of his fights have been here in his own backyard, he hasn’t had to go into the Lion’s Den to prove himself. He calls me mentally weak but we’ll see on September 16th.” 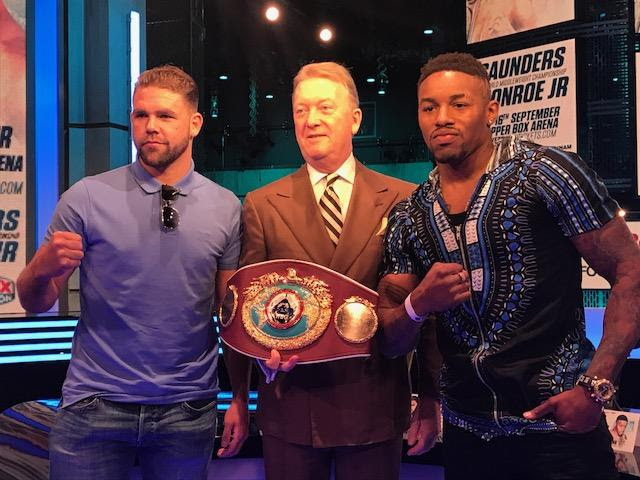 “Willie is a good fighter and a good boxer,” said Saunders. “This is his big chance and he isn’t coming over here just to make up the numbers. He has been in with some of the best fighters in the World including Golovkin where he came up short.”
“I think it is going to be a very close fight but I already have the mental edge over him. He said he was done against Golovkin and that’s not what a warrior would do. I’d rather get knocked out cold than quit. I haven’t had the chance to show my true skill and talent as of yet as a pro. I can’t afford to overlook him and I’ll be in the best shape of my life on September 16th. I’m 100% going to get the win.”
Artie Pelullo of Banner Promotions said: “I am very happy for Willie; this is a great opportunity. A lot of things had to fall into place for Willie to get this fight. Saunders is a great fighter, and this should be a terrific event. I want to thank tthe WBO as well as Frank Warren and Billy Joe Saunders for this opportunity.”

Saunders’ promoter Frank Warren said: “Bill will have to be at the very top of his game to get the win on September 16th. The winner of this fight will have the missing piece on the Middleweight jigsaw, Canelo and Golovkin both want that WBO belt.”

“If Bill comes through this fight we are pushing hard for the winner of Canelo vs. Golovkin. If Golovkin wins I hope we can do that fight in December, if Canelo wins it could be in the New Year. Bill has to go out there and prove a point, there is a lot on the line.”

Ilford Light-Heavyweight knockout king Anthony Yarde and teenage Heavyweight sensation Daniel Dubois will feature on an action-packed undercard. Yarde picked up the WBO European strap with a first round KO win over Richard Baranyi last time out at the Copper Box Arena while 19 year-old Dubois claimed the WBC World Youth Heavyweight belt in only his fourth contest.