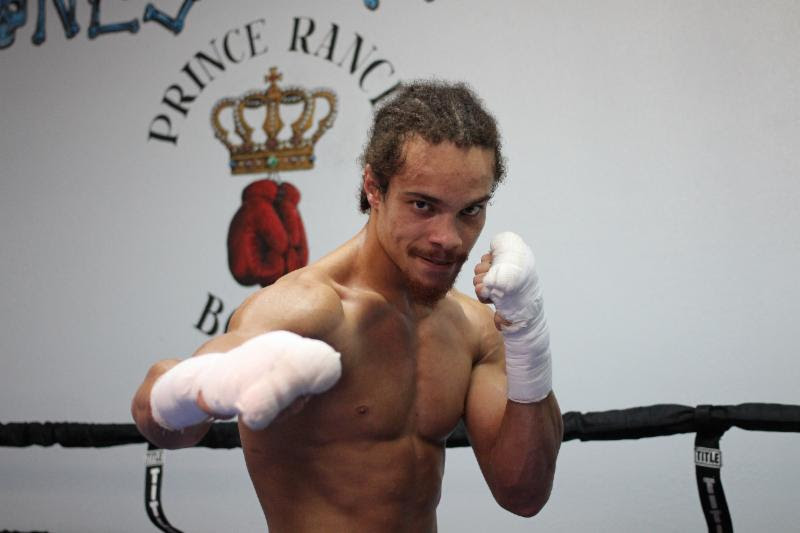 Photo by Mario Serrano Prince Ranch Boxing
Golden Boy Promotions’ undefeated super lightweight prospect, Blair “The Flair” Cobbs (7-0, 5 KOs), who is managed by Prince Ranch Boxing’s Greg Hannely, returns to the ring this Friday, March 16, 2018 at the Belasco Theater in Los Angeles, CA, on the highly-anticipated return of the LA FIGHT CLUB series. The event will be headlined by the eight-round flyweight fight between Seniesa “Superbad” Estrada (11-0, 2 KOs) and Sonia Osorio (10-5-1, 1 KO). Cobbs, from Philadelphia by way of Las Vegas, will face the undefeated foe, Mario Esparza (4-0, 1 KO) from Phoenix, AZ, in a four-round bout.
Cobbs, who recently signed a promotional agreement with Golden Boy Promotions in December 2017, is looking to shine in his debut under their promotional banner.  While training in Las Vegas with coach Bones Adams, Cobbs feels his career is about to take off.
“Man, I can’t wait to make my Golden Boy Promotions debut on March 16, and show everyone what I got,” said Blair Cobbs. “Signing with Golden Boy is a dream come true and I’m going to make everyone proud. This is the pivotal point in my career and I’m ready to advance to the next level. I worked very hard to get into this position.  Now it’s time to show up.”
“Blair has been looking amazing of late,” said Prince Ranch Boxing’s Greg Hannely. “He’s been sparring top level guys in Las Vegas and dominating. I believe Golden Boy Promotions will be very pleased with Cobbs.  I know they’ll be happy that he’s on their stellar roster. Cobbs will be at this best on fight night, ready to shine.”
Estrada vs. Osorio is an eight-round flyweight fight presented by Golden Boy Promotions. The event is sponsored by Tecate “THE OFFICIAL BEER OF BOXING” and Casa Mexico Tequila. The event will take place on Friday, March 16 at the Belasco Theater in Los Angeles, Calif. Doors open at 5:00 p.m. PT and the first fight and RingTV livestream begin at 5:15 p.m. PT/8:15 p.m. ET. The Boxeo Estelar broadcast will air live on EstrellaTV at 10:00 p.m. ET/7:00 p.m. PT. The card will also stream live on EstrellaTV.com and on YouTube via LBI Media, Inc.’s Fenomeno Studios. Mark your calendars and buy your tickets for the upcoming shows on April 6, June 1, July 6, Aug. 10, and Oct. 12.
Tags:Blair CobbsGolden Boy PromotionsGreg HannelyLA Fight ClubMarch 16thPrince Ranch BoxingSeniesa Estrada
Previous post